This story begins as all good stories do: manning a multi-family garage sale on a rainy day for your youth group’s mission trip.  I’m sitting there with my young ‘un in my arms, chatting with a couple moms from the church, when a FedEx truck pulls up.  The driver drops a package in my hands and speeds off, leaving me to squint at the “From” label.

Mythic Entertainment.  It’s either a death threat for unsubscribing, or…

“What’s that?” one of the ladies asks.

I follow the logic chain to its natural conclusion.  “Probably bones,” I say.

Even for me, this was a weird thing for them to accept.  I proved it by opening the box: lo and behold, bones.  “Cool, eh?” I said.  “Gonna go make me a soup with these!” 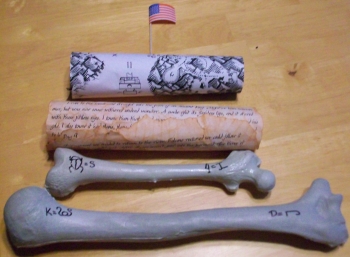 Oh, the looks I got.  The Cannibal Pastor, they’ll be calling me.

So you’ve all heard of this big Land of the Dead Warhammer viral marketing thing, where Mythic is shipping bones of their less fortunate developers to bloggers, both to cow them into submission and to send their players on a multi-blog treasure hunt — that, if solved, will give them a cool item in the game (Scarab Amulet).  It’s really pretty clever and also slightly disturbing, but at least Mythic’s not shipping live human organs around.  First things first, I had to have my fun: 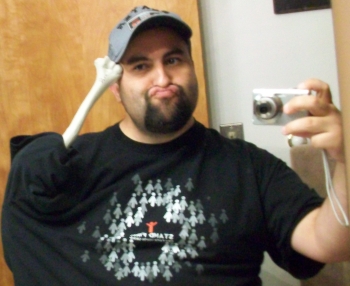 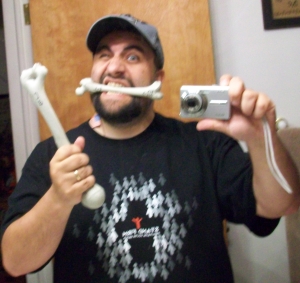 Even the little stinker wanted to join in: 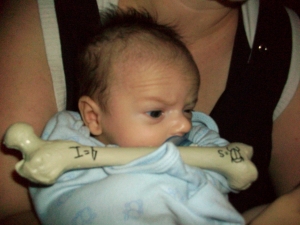 Okay, let’s get down to the willy-nilly of it.  I got two bones, plus a map and a diary page.  So for those of you playing at home, here are closeups of the symbols on the bones:

I know that’s a bit small, but hopefully big enough to read.  Looks like the letters I, S, D, K, X and H are representing, here.  Next up, the map, with an assist from lavender hand therapy: 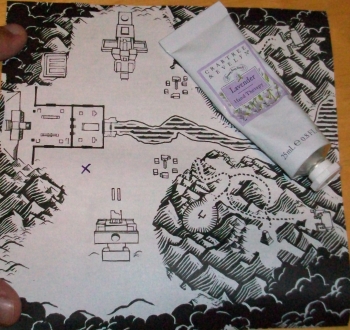 I’m married, people.  This is the sort of artifacts that one finds around a married man’s home: lavender and treasure maps.  Finally, there was a diary page, all ancient-looking and mysterious: 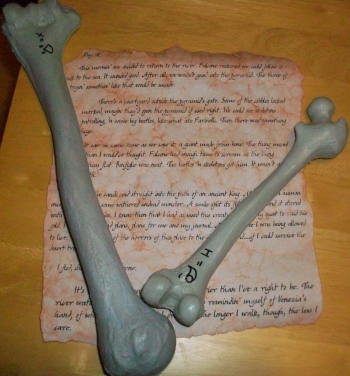 This mornin’ we decided to return to the river.  Falcone reckoned we could follow it back to the sea.  It sounded good.  After all, we wasn’t goin’ into the pyramid.  The three of us tryin’ somethin’ like that would be suicide.

There’s a courtyard outside of the pyramid’s gate.  Some of the cobbles looked marked, maybe they’d open the pyramid if used right.  We could see skeletons patrolling, ‘n some big beetles, like what ate Farinelli.  Then there was something huge.

It saw us same time as we saw it: a giant made from bone.  The thing moved faster than I would’ve thought.  Falcone had enough time to scream as the thing stomped him flat.  Bonfiglio was next.  The beetles ‘n skeletons got him.  It wasn’t a quick death.

I ran to the sands and straight into the path of an ancient King.  Might’ve been human once, but was now some withered undead monster.  A smile split its fleshless lips, and it stared with those pitiless eyes.  I knew then that I had amused this creature, with my quest to raid his gold.  I also knew it had plans, plans for me and my journal.  By his decree I was being allowed to live.  To carry word of the horrors of this place to the civilized world… if I could survive the desert trek.

I fled, chilled to the marrow.

It’s been a few hours now, ‘n I’m thirstier than I’ve a right to be.  The river water’s lookin’ better ‘n better.  I keep remindin’ myself of Venezia’s hand, of what it’ll do to me if I drink it.  The longer I walk, though, the less I care.

Even though I’m not currently playing WAR, my hat is off (as it ever was) to Mythic’s marketing team, their ingenuity and inclusion of bloggers in events like this.  Huzzah!

20 thoughts on “Warhammer: Make No Bones About It”