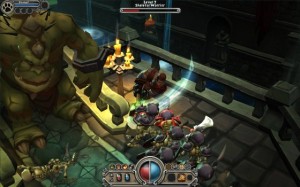 One of the bigger stories to come out of (almost) nowhere and bowl people over at PAX was Runic Games, which not only showcased an impressive Torchlight to adoring crowds, but who announced that we’d be able to get our grubby hands on this title in less than two months — October 27, to be precise — for only $20.  For those Diablo fans who have been subsisting on what precious few drips of information Blizzard releases on a bi-annual basis about D3, this came like a torrent.

Jerich over on the Runic Games forums gives a lengthy and detailed impressions of the title that are certainly worth a read, the Examiner has a review, Gamasutra talks about its art, while MMO News scores an interview with the devs.

Personally, I wasn’t expecting Torchlight for at least another six months, since I’d heard very little about it up to now, so this came as a welcome surprise to an already-full fall gaming schedule (Champions, DDO, Guild Wars, Dragon Age, Borderlands).

Now, you might recall that this single-player Torchlight is the first step of Runic Games’ master plan, in which they envision the title morphing into a MMO (or being a prologue to one).  In any case, we might be witnessing a title steal the thunder from Blizzard, something some predicted would happen (and sadly did not) with Hellgate London.  I had huge hopes for this team’s previous work on Mythos (rest in peace), and am glad to see they picked themselves back up from that experience to begin anew.