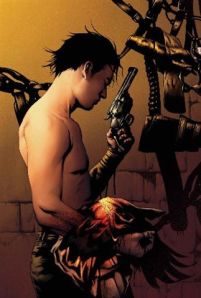 In Stephen King’s seven-part opus The Dark Tower, his main character Roland is a “gunslinger” who is traveling through a post-apocalyptic world on a singular quest.  One of the challenges he runs into in the first few books is the shortage of bullets for his twin six-shooters, which is of particular concern seeing as how it’s hard to be a gunslinger without, ya know, working guns.

I’ve thought a lot about The  Dark Tower as I’ve tromped through Fallen Earth, as I imagine quite a few other King fans have as well.  My character is a gunslinger of sorts, relying almost exclusively  on a pair of sidearms (as well as a sawed-off shotgun and a revolver) for defense and attack.  And as Roland struggled with finding enough ammunition, so the acquisition of bullets is a constant struggle in FE.

As a result, my character has honed ammo-making down to a science.  Light ammo is not too difficult to make, although you do need to be diligent in gathering the mats and producing large batches of it, since it’s easy to go through bullets like crazy in even a single play session.  There are four mats to get or buy:

Two of these are pretty cheap if you want to buy them (copper/geologic material), but the biologic and lead will certainly cost you,  especially when you start buying them in large bulk.  Therefore, as always, it’s a good idea to scavenge all the mats for free.

It’s important to time your bullet crafting well.  Making gunpowder is quick — a minute or less for each.  I usually focus on doing a lot of gunpowder while I’m playing, making as many batches as I can.  Crafting the actual bullets is considerably longer (10-13 minutes each, resulting in 80 bullets), so I queue those up at the end of a play session to build while I’m offline.

So I just wanted to drop a tip — the town of Coppermine has a (guess what?) mine nearby that holds all four of these resources.  Geology nodes and ants abound, and if you spend a lot of time in there, you’ll come away with full bags and a happy heart.  The great thing is that the nodes respawn quickly, and an even greater thing is that there’s a quest chain that sends you into an instanced version of the mine that you can harvest to your heart’s content.

12 thoughts on “Bullets and You: A Love Story”