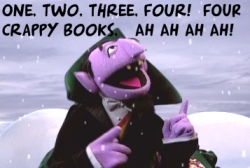 Sorry, I’m just SO EXCITED!  Who will Bella fill her meaningless, empty, self-involved life with next?  A werewolf?  Cap’n Crunch?  A creepy televangelist who has 14 “child brides”?  All I know is that I somehow messed up big time, what with getting married to a loving woman who isn’t secretly any sort of terrible monster waiting to drink my blood or flay my skin.  I’m so sorry, Bella!

And if you haven’t been over to Bio Break’s sister site, Mutant Reviewers From Hell, here’s the cult movie goodies you’ve been missing out on: