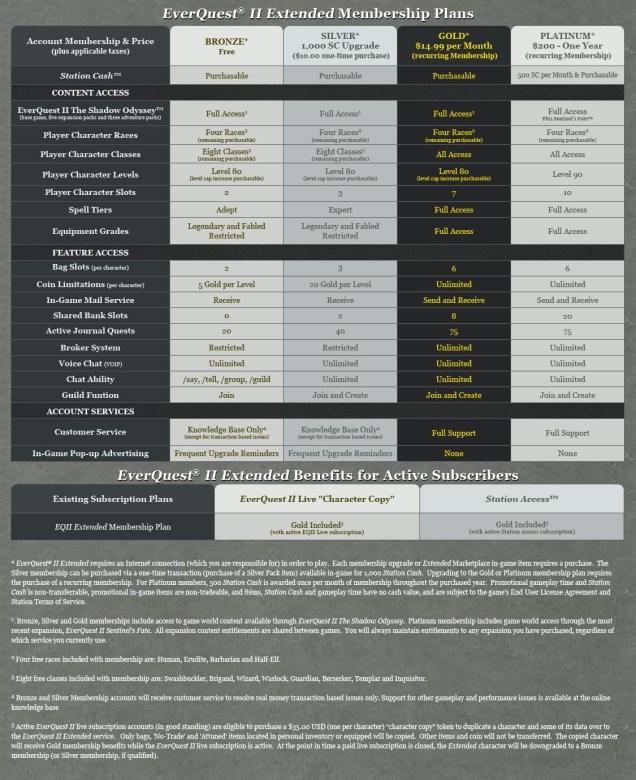 When MMO historians look back on 2010, I think they’ll find it ironic that the biggest cataclysm of the year had nothing to do with World of Warcraft’s third expansion.  Instead, it’ll be the domino effect of subscription games toppling over into free-to-play/freemium/hybrid payment models, spurned by the success of smaller titles with these models and DDO’s 2009 conversion from a sub-only game to a sub/free-with-microtransactions hybrid.

Then comes along 2010, and LOTRO falls to this (unsurprising, considering that they share a studio with DDO), Cryptic contemplates it, and then SOE finally throws their hat in the ring.

As you may have seen from the news breaking out all over the blogosphere, SOE is converting EQ2 to — and this is putting it kindly — a more varied business model.  They’re essentially splitting EQ2 into two different versions on two different types of servers: the normal subscription game with the current servers, and a F2P version on special new servers (with the name EverQuest 2 Extended).

I’m not a huge EQ2 person, obviously, so it’s not like I know the ins and outs of how this impacts current players.  I will say that from my personal perspective, I’m intrigued.  Heck, I’ll play EQ2 for free, especially casually, whereas I don’t have the time or current inclination to shell out dough for it.

The limitations of EQ2 Extended remind me a bit of LOTRO’s upcoming change, with some of the higher level content locked (but available for purchase, natch), and several races and classes locked away (ditto).  They also have a one-time purchase to upgrade to a higher level of free service (again, much like LOTRO).

What strikes me as really funny that the highest level of this new service — Platinum — is essentially a regular subscription, only much more costly.  In this case, $200 a year (that’s $16.66 a month) for all of the same stuff subscribers on other servers get.  The one consolation is that they give you $60 back in station cash, so I guess that’s something.

So if DDO and LOTRO is any indication, the EQ2 community should be hitting the roof right… about… now.