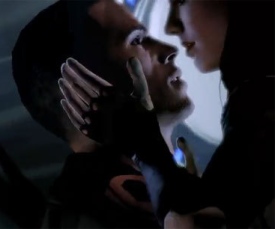 So back at PAX East, Larry asked if I’d help him with his Old Republic interview by using my many years of academic and professional training by holding up a microphone so he could take notes by hand.  Yes, I said immediately, not because I have a microphone fetish, but because I’m a nosy person and wanted to interject a few questions of my own.  After all, if the opportunity is there, it’d be a waste not to take advantage, right?  We’re all gamers, you understand how I’m thinking.

I forget who we were talking with (am terrible at names), but during a lull in the interview I throw a curveball.  “So BioWare is notorious for interjecting romances into its games,” I said, “and I know you’ve said there’s going to be romantic options with the NPCs in The Old Republic.  What I want to know, as a married man, is the romance going to simply end after your characters kiss or hop in the sack, or will you show that relationships go past that point?”

Romance and relationships… AFTER the kiss?  Is it possible?  Do such things even exist?  In real life, of course.  But in romantic movies and BioWare games, not really.  The moment when two people finally admit their mutual attraction and get together is kind of the ultimate point, and nothing happens past that; it’s just left up to the imagination.  Further courtship?  Marriage?  Relational maturity?  Bah… there’s no need to do that.  Just hook them up and churn out a sex scene for the perverts and we’ll call it a day.

I guess what I was driving at by asking that question was the hope that BioWare would be using the persistent, ongoing nature of an MMO to continue relationships through their ups and downs instead of building up to a single moment and then effectively ending it by freezing that relationship in time.  I’ve always wished that NPCs in all MMOs would grow in their relationships with you, especially the ones you’ve done favors for.  Most of the times it’s like you get that quest reward and then they shun you forever after that.  What, no follow-up phone call?  Ask me over for dinner sometime?  Name a kid after the hero who saved mommy from the dragon?

We’ve seen how players are pleased with memorable NPCs return later on in a game, mostly because it helps carry on the illusion that the player-NPC relationship is continuing in a way.  If virtual relationships are to be an important part of the future of MMOs, I want to challenge developers to at least leave doors open for future twists and turns in those relationships instead of an end point.

17 thoughts on “BioWare and the Romantic Movie Genre”