This is a story about a tree.  You already knew that from the title.

My life was happier before the tree.  Before the tree, playing RIFT was fun… relaxing… engaging.  Heck, I just went through a vampire nest and cleared out 2,000 Edwards in the time it took Stephanie Mayer to think up another synonym for “gorgeous.”  You could even say that I was riding at the top of the world.

So quickly things change.  So quickly are our lives ruined.

I saw the tree as I climbed up a steep hill.  It wasn’t anything to speak of; a gnarled old thing that lurked like an arthritic claw.  On any other day, in any other game, I would’ve passed it by.

Except it had a sparkly, glowy artifact at the top-most branch.  And I simply cannot resist gunning for artifacts in this game.  The devs like to put them in out-of-the-way places that encourage exploration, and I love that.

The only problem was that this particular artifact was put there by a clearly insane person at Trion Worlds, and when I find that person, he or she and I will be having words.  Words that end with fists attached. 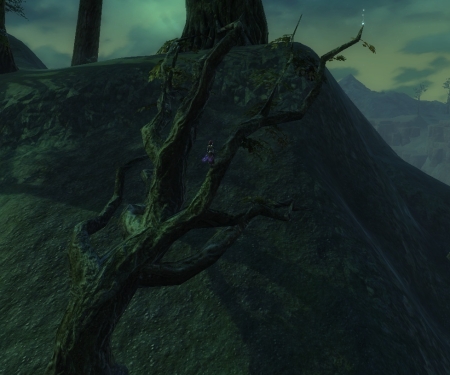 As a gamer who cut his teeth on Pitfall! and Super Mario Bros., I’m no stranger to platforming.  Sometimes I even enjoy it.  But this was a platforming puzzle that I quickly realized was neigh-on impossible.

It was bad enough that the branches were so narrow that a single misstep would send me plummeting back down to the ground, but I could’ve lived with all that had there not been one evil, demonic branch that stymied my progress:

Oh, I learned to hate that branch.  That branch made it absolutely impossible to proceed.  I couldn’t jump past it or edge around it, because it blocked the entire approach.  But… there was an artifact up there!  That obviously meant that it could be done, right?

And thus a few enthusiastic attempts quickly became an unending obsession.  I had to get past the branch.  I could TASTE that artifact.  I kept going, try after try, quickly climbing into the triple digits of attempts.  I was obsessed.  And this tree was going to drive me mad.

Oh sure, as soon as I was getting close to giving up, I would make it past the branch somehow, but not in any way I could replicate.  I nearly whooped in relief, but would quickly fall off as there was no way up the next branch without sliding off.  Time after time after time I climbed, I growled, and I deeply wished for a chainsaw to cut down that tree.

It never happened.  For all I know, the artifact is still up there, laughing at me and my stupidity.

And I could not sleep last night, as the madness welled up from deep within.

28 thoughts on “A Story About a Tree”