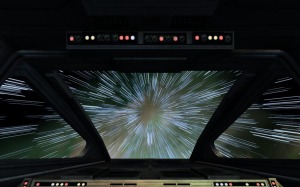 If you weren’t aware, today is the absolutely last day that anyone can sign up for Star Wars Galaxies before SOE locks new registrations and allows the current batch of players to enjoy the game up until its December closure.  SOE also, in probably maybe possibly who-knows NOT a coincidence, released a much-anticipated atmospheric flight patch today, which will probably be the last big game update SWG will ever see.

And, no, I didn’t sign up for the service, but I was thinking about how weird it would be to go into a game knowing it would end at a set point.  All games end, of course, but we operate under the illusion of gaming immortality — that the game will always be there, our characters always be there, and we will always have the option to go back.  In this case, it’s not true; SWG is a “dead MMO walking,” as are all of the characters within.  It changes the rules.  It forces a new perspective.

People who are faced with a real-life death sentence — say a terminal illness — often report just how much it changes the way they live each day.  They appreciate things more, they get out of their routines, they take more risks, and they enjoy stuff we typically take for granted.

I’m certainly not saying that playing a condemned video game is equal to this, but there is a parallel to be seen.  Already we’re seeing players put a lot less into the accumulation of wealth and hoarding in the game, and more into giving stuff away and doing things for the sheer fun of it.  You can’t take anything with you, after all, other than the memories, relationships and screenshots, so those are what becomes the premium currency.  Everything else is the small stuff.

For someone to jump into the game for the first time today with that few month lifespan, it’s got to be totally bizarre.  Progression almost seems pointless unless you simply want to see areas you couldn’t otherwise.  It might be an idea to latch onto a veteran guild and let them sweep you through the ups and downs of the last month.  For some, this might be a good way to take the edge off the wait for The Old Republic — and yes, despite what some people assert, I’m quite certain that some TOR junkies are more than willing to get a different kind of fix from SWG just because it shares the IP.

Anyway, in a very real sense, today is the beginning of the end of SWG as the lights slowly go out, one by one.   The only thing left is to make the best of the time left.

7 thoughts on “Blasting off into Star Wars Galaxies sunset”