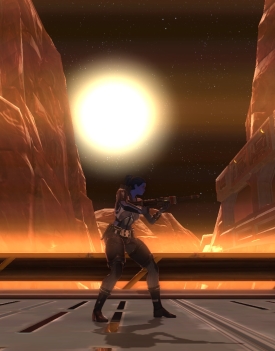 I want to begin today’s post with a mini-rant that’s been brewing in my mind for a while now.  Basically, I’m more than a little tired of the tactic that some commenters — not necessarily here, but across many MMO blogs and forums — use to discredit and downplay a blogger’s enthusiasm for a game they’re getting into and enjoying.  The tactic goes somewhat like this: “Pfft, they’re always on about the big new thing, but come three months from now they’ll be gone!  They’ve done it before!  So their opinion should be scrapped.”

I want to stress that most readers I’ve encountered aren’t like this, but the ones that are irk me to no end.  First of all, I’ve yet to meet a single person who has only played one game — period — in their life and has yet to leave it.  Maybe some chess people, I don’t know.  Being a gamer means that you do shop around, try new things, and — yes — move on from time to time.  It’s part of the hobby.  Stopping playing a game, even one you’ve poured months and years into, doesn’t necessarily mean the game was ultimately bad, but that it was just, for you, time to move on.  Second, it’s a cheap shot that uses an ad hominem attack to try to undercut what’s being said by going after the one saying it.  Third, I think it’s a good thing for MMO bloggers to be trying (and getting excited about) all sorts of games, because it does make for varied and entertaining reading.  Some people settle down for a long time; some don’t.  Good to hear from all types.

Anyway, rant over.  I’m still completely geeked out over SWTOR and I don’t care what that says about me.  I really am having a very, very hard time playing anything else at the moment.  It doesn’t mean it’s the Best Game Evah, but it’s quickly shot up into my top five MMOs of all time.  But enough about the meta stuff, what have I been up to in game?

An Agent on holiday

Being in a guild that had a server-first level 50 means that there were a few moments where I felt the old pressure to race, race, race onward and “catch up” with everyone else.  Fortunately, I’ve resisted this, and probably for the best since I can’t devote gobs of time in game anyway.  It was heartening to hear from the devs that a “vast majority” of the playerbase is still under level 30, and in a few more weeks none of this leveling epeen business will matter whatsoever.

The Agent was an excellent pick for me for a main character, and I’m feeling fully satisfied with that decision.  It’s not uncommon to see a fellow Agent out and about, but we’re certainly not as overpopulated as the Force-using classes, so there’s a little hint of specialness at play here.  And as an Operative, I’ve got so many options in each battle that it doesn’t get old: Stealth ‘n stab, AoE blasters-n-boomers, healing, etc.  Stealth has to be one of the greatest things for this game, because when you’re trying to plow through a quest and you don’t want to stop every two steps to take out another group of enemies, you don’t have to.  You have that choice.

I’ve quickly filled up all four hotbars and am feeling a little bit in despair that I’ve got more abilities and items coming my way than I’ll have space for slotting.  I certainly hope this is one of the UI improvements that BioWare is working on.

And hot dang is custom gear a hoot to work with.  I keep modifying my look based on what new gear comes down the pike, but it’s kind of neat to not be as obsessed with stats (since mods are used for them) and instead just grabbing what looks coolest.  I’m finding flashpoints a valuable source of cool-looking custom gear, so that’s gotten me grouping quite a bit.

Speaking of grouping, man am I tired of the “SWTOR is just a single-player game” schtick.  I really don’t get this.  It is no more and no less multiplayer than pretty much every other MMO on the market, and I’ve seen people grouping up all the time.  The multiplayer dialogue and social points and extra XP and heroic quest rewards all promote interactive play, and it’s certainly gotten me to team up with family, guildies and strangers on a pretty regular basis now.

Chapter One fade to black

I really, really wanted to get through the first chapter (out of three) in the game with my Agent before the winter break ended, and stayed up fairly late last night to make it so.  This was partially due to me just enjoying the story and wanting to see how it was all going to play out in the first big climax of the plot, and partially due to wanting to secure my legacy name.  No spoilers here, not really, but I was pretty happy with how the Agent’s first chapter concludes.  I predicted at least part of it, but still it was satisfying and I was impressed that BioWare (a) made me return to past planets, like Hutta, that had me going “Wow, has it only been a couple weeks?  Feels like forever!  It’s so small now/!” and (b) used unique sets and cinematic techniques to tell the conclusion.

Like some others I’ve been reading, my SWTOR character’s really gotten into my head.  It’s not just what the NPCs say and do, but more about what my Agent says and does that pulls me into this game.  Typically my character is pretty compassionate and looks for ways out of situations without mindless killing, but there was one point where she was dealing with a sociopath fallen on hard times and couldn’t be bothered to dredge up any sympathy as a result.  I saw the nice option and just couldn’t take it.  It’s not what she would do.

While you certainly can ESCape out of conversations in the middle of them to replay them, the fact you can’t just reload earlier save points gives your choices and dialogue more weight than in single-player BioWare products.  I’m constantly wondering what would’ve happened if I’d just done that other choice or said that other thing, but I know I have to live with what I did do.  That makes me consider options carefully, even when I realistically know that it’s just flavor text.

Chapter One concluded with a fairly epic confrontation that unfortunately was bugged out of the wazoo, which was a known issue that’s been mentioned more than once on the forums.  It took me quite a few tries to succeed in the fight as I not only had to combat the boss but struggle against the glitches that worked against me.  Speaking of which…

You know how you can love something and still see the flaws and call them out?  SWTOR is great, but dang is this a bug-riddled experience.  I’m not even talking about small typos or occasional glitches, but big stuff that really, really should’ve been caught in beta and fixed well before now.  It’s just embarrassing how many of them there are, including one of my favorites, when your companion character’s eyes or whole skin turns to this weird black-chrome finish.

If BioWare isn’t calling an open season on bugs with its dev team right now, then I’d be befuddled.  When you have such a polished game in most other regards sporting glaring bugs that everyone is seeing on a daily basis, it can’t but reflect badly on the focus of the company.  These need to get squashed ASAP, and that’s all I have to say about that.

19 thoughts on “SWTOR Chapter One: The Phantom Argument”