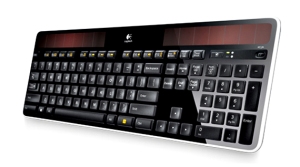 So last night something interesting happened that effectively froze my gameplay session: My keyboard stopped working.

You see, last Christmas I asked for and received a Logitech wireless keyboard that was, among other things, solar powered.  It’s got a pair of panels at the top that recharge the batteries from sunlight and room lights, and generally it’s worked just great for me over the past three months.  What I didn’t realize until just lately, however, is that the amount of power that it was gaining every day was being outdone by how much I was draining it, causing a very slow but steady decrease in the overall battery level.  And last night it went kaput.

So I’ve either got to get a desk lamp or put this keyboard in a sunny place during the day, or else just get a new keyboard.  Because having it go out on me like this isn’t an option, and it kind of sucked to be in the middle of a game and suddenly have nothing but the mouse available.

As a result, I didn’t get much done:

My Captain is still in the midst of Enedwaith, and I don’t feel rushed to get her to Dunland before exhausting the main content.  She’s 66.5, so already I’m going to be going into Rise of Isengard at a higher level than my LM did, and that makes me happy.

Once again, I finished up the not-so-hidden Hobbit village area, and this time around I completed the deed that got me a pair of Stoor boots for my house.  I really like the idea for this village — and the music that plays in town is fantastic — but both times I’ve done this content I’ve come away underwhelmed.  You’re really not there long enough to get much of an impression from the inhabitants, and after the initial handful of quests there’s no reason to stay other than to do repeatables for XP.  Characters from the Shire stand out to me much more than any of the Hobbits here, and that’s a shame.

I also did finish up Volume III Book 2, although it was a lot less interesting the second time around.  I think I have about one quest hub and epic book left before I head to Dunland, so go me.

Before my keyboard cut out, I was having some fun on my Trooper.  I like how straight-forward the class mechanics are — just a lot of heavy firepower, explosions, and watching things die.  I’m still not sure if I’m going to stick with her or go back to my poor Smuggler, but I’ll at least get her to level 10 before going back and forth.

I do like playing her as nasty and evil as the game allows, which is kind of shockingly evil right off the bat.  That’s BioWare for you, though; sometimes shades of gray are but a fleeting thought.  Like many others I’ve read, I’m still puzzled over why some actions — like returning stolen medicine for hurt soldiers — are deemed dark side choices.  It seems that these sorts of weird counter-intuitive choices exist mostly at the beginning of the game, perhaps for early testers to get a deep impression of the system, but in my Agent’s experience, it mostly became common sense from the second planet onward.

6 thoughts on “Play Diary: Running out of juice (#lotro #swtor )”