Right now the Star Trek franchise is celebrating the Next Generation’s 25th anniversary, which makes me feel old all over the place.  Seriously, I can remember watching one of the sex-filled first-season episodes with my parents and collecting Wesley Crusher cards from a Wheaties box.  It’s been some time.

In the early 90s, Trek had another 25th anniversary, but this was of the franchise as a whole.  In my opinion, the period of 1992-96 was the watershed moment for Star Trek (TNG, DS9, First Contact) and a terrifically fun time to be a Trekkie, which I was at the time.  While Trek never got as many video games as its big brother Star Wars did, it did not do terribly for itself.  The problem was that many of the games were just awful at best.  Even the 25th Anniversary games on the NES and Gameboy were atrocious, and I was worried that the computer edition would follow suit.

Happily, Star Trek: 25th Anniversary on the PC ended up being one of the greatest Star Trek games of all time.  I loved it so much — and I can’t believe I never played its sequel Judgment Rites.  That’s what you get when you don’t have the internet around to inform you of everything.

ST25A worked so well because it instituted a mash-up of two gaming genres.  It was primarily an adventure game, but there was also a starship simulator for the combat scenes.  While it wasn’t anything as advanced as how Star Trek Online ended up being, the space combat was pretty dang fun. 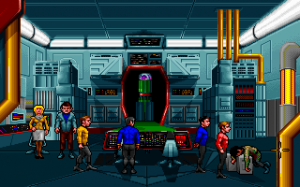 However, the adventure portion is what sticks out in my mind.  ST25A was structured as the “missing season” from the show, and therefore picks up after the end of the classic series’ third season.  As such, the game is broken down into seven “episodes,” each of which are mostly self-contained stories.  I actually ended up loving the episodic approach to this game and wish that more adventure games followed that route.  You didn’t have to wait forever to get to the climax, and if one of the stories tanked, well, there were six others to entertain.

A lot of the adventure portion was talking with the crew, visiting planets/starships/space stations, investigating, and (of course) solving puzzles.  You couldn’t let any of the main characters die, although the game helpfully supplied you with a red shirt that could be offed without severe penalty.

My specific memories of the episodes are fuzzy, considering the time that’s gone by.  I played this on my then-new 386 after school each day, and as a Trekkie it really did a lot to fuel my wish fulfillment when it came to imagining that I was part of the series.  The classic Star Trek series has always been my favorite (at one point I had every — EVERY — Star Trek TOS novel, screenplay, and obscure paperback in a massive collection), and the game lavished so much love on the familiar characters and settings.  Sometimes the game could be a little scary, but more often than not exciting and sometimes fiendishly tricky.  The final space battle took me numerous attempts to finish, but finish I did.

I’d definitely be interested in replaying Star Trek 25th Anniversary if I got my hands on it.  Adventure games, I find, age well, especially if they weren’t hard on the eyes (and ST25A certainly wasn’t).