Seriously, people, if I ever, ever say that I’m going to get up in the middle of the night to play a video game, I give you full permission to castigate me for it.  Castigate, not castrate, mind you.  My sleep schedule got so messed up that I spent most of yesterday in a haze.  And while it was certainly cool to be right in Guild Wars 2 in the beginning hours, name-grabbing-wise, it was a bust.  Most of the cool names I wanted were already grabbed — seriously, just about every one-word name is taken at this point.  So I spent a couple hours and went back to bed.

Playing it live feels so much different than beta, and I’m so glad I have a character to actually invest in.  But even more than that, this is just a game that exists to wow you left and right.  I’m sure that there are those who have become immune to in-game beauty and details, and only see the numbers and min-maxing, but that’s missing the point here.  It’s a game where I felt fully justified to spend the first hour just gawking around like a tourist instead of killing things, and I’m forever going off the beaten track to explore.  Did you know that Rata Sum has a giant aquarium?  Now I do.

My Asura Engineer, Syp, is a perfect match.  The animations on that race are endlessly entertaining — I love how she flails her arms while jumping — and the humor and attitude keeps making me laugh.  Plus, I’ve got a character who can shoot pistols, rifles, flamethrowers, and toss grenades.  I don’t know why everyone doesn’t roll one.  It’s like playing a heavily armed version of Stitch.

It’s really freeing just to surrender myself to the whims of the game’s event system instead of trying to impose an agenda, too.  Sure, I loosely follow the hearts and points of interest around, but the second I see an event, I’m there.  I’ve read some accounts of people who don’t see how the events are an iteration of what’s come before with public quests, but I’d suggest that those people stick around for a bit.  In one of the first events I did, I helped an Asura gather up fire opals in a cavern to power up his golem.  Lots of people ran around doing this, and pretty soon the event succeeded and that was that.  Most of those people left.

Except I stuck around.  I followed the guy and his golem as they walked over to a fighting ring, and an entire scripted fight took place between two golems.  It was pretty cool, and it reminded me that the story is just as much of a reward as karma points.

It wasn’t a perfect weekend, of course.  There were plenty of server hiccups, although I personally didn’t have problems getting on to play when I wanted to.  I’d say my two biggest complaints were the lack of Asura haircuts and the inability to do a guild search.  What, GW2 doesn’t have a /who command?  How are we supposed to hook up with our guild mates unless we rely on out-of-game tools?

I’m sure we’ll be talking more about GW2 this week as the official launch happens and things settle a bit.  In the meanwhile, here are a couple more Ellivena screenshots sent in by reader Kaeru (click to enlarge): 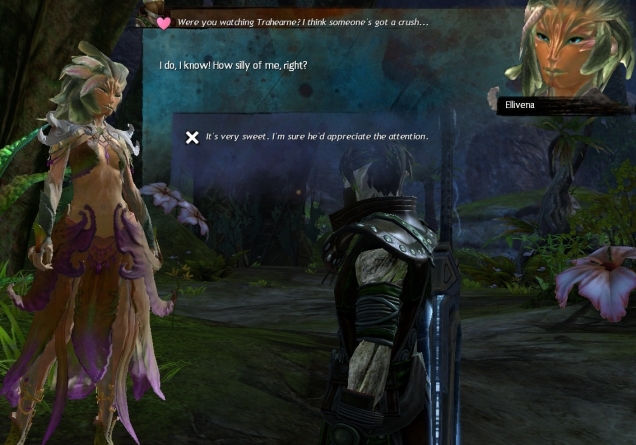