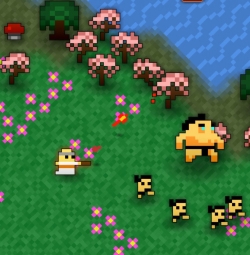 I continue to be disheartened about the lackluster field of mobile MMOs, wishing that there would be something engaging that I could enjoy on the go.  The field that’s out there right now is either trashy (low quality, high microtransactions pressure), kind of weird/obscure, or a little too hard to control with a smartphone.  Spacetime Studios’ titles and Order & Chaos are probably at the top of the short list, but while I’ve repeatedly tried them, I can’t stick to either.

My thought is that mobile gaming requires MMOs to be tailored to those devices’ limitations and abilities, instead of trying to force a square peg of PC gaming through a round hole.  MMOs typically require a complex HUD, multiple input keys, and navigation through 3D spaces, all of which are difficult to pull off on something a small touchscreen interface.

However, if there had to be adaptation of current MMOs to the mobile platform, here are four I think would do the trick just fine:

Even though Wizard101 navigates through a 3D world, the battles are pretty much just picking out cards when they pop up — quite easy for a touchscreen.  Plus, the UI in that game is already simple and has a built in simple chat feature that allows you to pick between phrases.  Doesn’t seem like it’s too graphically complicated, either.  So yeah, I’d love to see this make the jump.

2D feels much more natural for mobile gaming — at least then you don’t have to fiddle with camera controls.  RotMG has a cool retro pixelated look that’s already popular with mobile gamers, and it’s a simple game when it comes to combat and items.  This would be my top choice.

Nexon keeps making feints toward bringing MapleStory to mobile devices, but so far it’s all been offline solo stuff only.  I’ve never played MapleStory, but it’s got the 2D down and a strong following, which seems ripe for the plucking.

Why not?  You can’t access this Flash title from Apple devices, but it seems like it would be awesome as a mobile game.  Light platforming, lots of crafting and gathering, 2D graphics — perfect.

Any of those I’d welcome into my mobile arsenal with open arms.  What about you?  What games do you think would make great mobile MMOs?

One thought on “Four games that would make great mobile MMOs”