“I have one and only one rule in this class. I will tolerate no reenacting, whether it’s ironic or sincere, of the Patrick Swayze/Demi Moore scene in Ghost.  Ever since that movie was released in 1990, I have seen every conceivable variation of what I call ‘Ghosting’.” 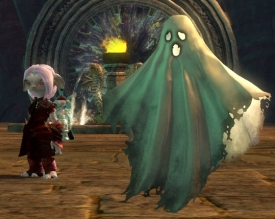 So this is my ghost, who I call Jack.  Jack’s part of the great Guild Wars 2 cash grabbereen, or as others call it, Halloween 2012.  I’m finding that this event is about 60% free stuff and 40% cash shop promotion, but as long as you don’t fall for the false promise that the black lion chests will drop you some exotic skins (as the rate for those is reportedly very low), you’re good.  I felt that the “sure bet” of three spooky minis — a ghost, a skeleton, and a spider — was a better use of my money.

Economy-wise, you will be rolling in gold if you’re selling gems right now, as the market shot up dramatically at the start of the event.  We’re talking 100 gems that used to go for 24 silver or so are now a gold more than that — and climbing.  But at least ArenaNet is giving away one costume item and there are other ways to get some goodies in the game.

Really, I came for the decorations and ambiance.  I loved Halloween last year in Guild Wars 1 — the Mad King is definitely a crowd favorite, and I would be quite disappointed if he hadn’t arrived.  It’s awesome to see this as ArenaNet’s first big update, and it’s quite sizable, if scattered and somewhat hard to suss out where to go to experience all of the new stuff.

The core of the event is a series of scavenger hunts, the first of which is now unlocked.  I agree with Kaozz here — it’s kind of underwhelming.  I’m just not a big fan of scavenger hunts in general, as they drive me to look for guides the second a vaguely worded clue is tossed my way.  It’s weird: I’ll put up with this stuff in The Secret World, but not so much here.

With a guide, it only took me a half hour or less to get all six pages of the first book, and I enjoyed the ambiance, the little stories that came with each section, and running around with all of the other players.  Heading back into a crypt that I remember killing me several times over on my first exploration was a joyful treat.

What I actually found a lot more fun was just hanging out in Lion’s Arch for a while, soaking up all of the decorations.  The team really did a knockout job coming up with a great Halloween atmosphere that hits it spot-on, from the flapping bats hanging from wires to the pumpkins that you can carve (and get an achievement for doing so, I might add).  I played a couple rounds of the new costume brawl, which was pointless but chaotic fun.

There’s a fair bit of drama circulating about the event, but I’m going to wait until it’s all done before giving a final thumbs up or down.