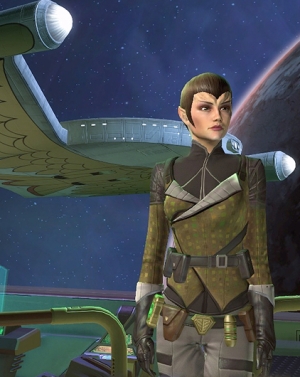 It’s not like the signs weren’t there.  Players have been asking for a Romulan faction ever since the game launched, Denise Crosby recently came in to record voiceovers, and the last major update was all about building New Romulus.  Still, the announcement of STO’s first expansion, Legacy of Romulus, is pretty exciting for the Trek faithful.

It remains to be seen how fleshed-out the Romulan content is.  Players have been dubious of a Romulan faction because the Klingon PvE content has never been up to snuff yet.  But now it looks as though you’ll be able to roll a Klingon from level 1, so I guess Cryptic’s figured out a way to give enough missions to each side.

I’m almost done with the Federation story missions, so I like the idea of rolling a Romulan (or perhaps a Klingon) to try out a different side of the game.  I’m not a die-hard Romulan fan, but I do like their aesthetic more than the Klingons.  Really, it comes down to whether you like green or red.  The Borg aren’t happy that they have to share green with the Romulans, but I’ve always thought that the Collective would be better suited with, say, hot pink.  “Resistance is fabulous!”

The improved UI, oddly enough, is the other thing that’s grabbed my attention.  I’m all about making games look and handle better.  STO’s UI isn’t horrible, but it can be cluttered and sometimes not as user friendly as it should be.

So good on STO for breaking the warp-expansion barrier.  It’s a nice sign of a healthy game, and it’s definitely rekindled my interest in playing it.