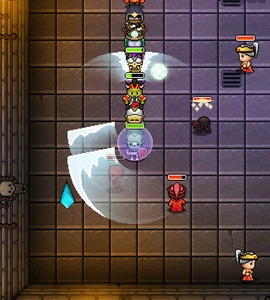 I get ridiculously excited whenever NimbleBit releases a new game.  Tiny Tower remains one of my most-played iPhone games, and Pocket Planes was a good ride for a time.  Last night the studio released Nimble Quest, a mash-up between the classic mobile game Snake and RPGs — and it’s pretty addicting.

The basic concept here is that you start with a single hero (that you choose from a list) and walk around a big room while slaying enemies.  You start to accumulate other heroes to follow you in a chain, and their attacks are added to your arsenal.  If you bump into a wall, an object, one of your own heroes, or an enemy with your lead character, you die and have to start aaaaall over.  Your lead character can also be killed with enough attacks.

So you’re trying to get as far as you can in a single game because every new level that you conquer for the first time grants you a new hero for your chain.  There are a number of RPG elements in here: power-ups, leveling up your lead character, permanent buffs, etc.  And since all of the heroes have different styles of attacks, picking the best one for your lead can change everything.

I put a couple sessions into it so far and generally like it a lot.  The controls are simple and responsive, and it creates a zen-like experience as you continue to move and attack without stopping.  There are definitely some strategies in play here and both the look and one hit, one life attitude make me think of old-school console games.