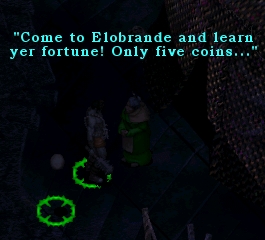 (This is a continuing series detailing my playthrough of Planescape Torment.  You can check out the whole run on the Nostalgia Lane page.)

Leaving the brothel, I continue my exploration of the Clerk’s Ward.  A creepy fortune teller, plying her trade at night for some reason, gives me a scroll that she’d been holding onto since her mother was charged to hold onto it for me.  It’s a nasty note that says something about slowing me down, and I take a bit of magic damage.  But I’m tough and pull through just fine.

Not too far away is an art gallery, where an old blind lady, er, watches over the place.  She’s blind by choice, so I don’t feel bad about the pun.  Anyway, she does give me some backstory on Ravel, especially how the night hag was fascinated by a singular question: “What can change the nature of a man?”  That right there is the core of Planescape Torment and my character — a nameless man who changes from iteration to iteration and cannot remember his past self.

A little further south of the art gallery are a few wanna-be street thugs.  I smack ’em down and loot a box off the leader.  A box with a head inside.  A box with a talking head inside.  It wants me to return it to its body, and because that comes with the sweet promise of XP, how can I say no?

Outside the civic festhall is a mage who wants to be in charge of training all of the mages.  He apparently used to be quite the curser, and I’m not talking bad words.  In a memorable line, he says that he once cursed a man to talk out of his butt and poop out of his mouth.  Planescape Torment, ladies and gentlemen.  It’s for kids!

The festhall is a pretty large building, brightly lit and definitely posh.  Much nicer than many of the locations I’ve been to so far.  Right inside the door, a woman says that she’ll pay me to let her kill me.  I’m strapped for cash at this point, so 2,000 coppers and one knife wound later, I’m in a better place.  And also still not-dead.

Near her is the leader of the place, Splinter.  No, he’s not a rat and is not in the immediate vicinity of any mutated reptiles, but I still think of him talking in that voice from the TMNT cartoons.  I tell him that I joined his faction, the Sensates, a long time ago, and get some XP for that little truth.  What faction haven’t I joined, really?

I complete two other quick quests in the main hall.  I return the head to its body, although we never do get to see what’s inside the box.  Gweneth Paltrow?  Darn.  I also pick a pretend fight with one of the brothel’s prostitute’s boyfriend, just to make him jealous.  He’s way too much of a nice guy and decides to bow out of the relationship, so I have to convince him to stick around and get her back by being aloof.  Somehow I feel that this is wrong.  It’s amusing though.

Before I finished up for the day, I encountered a guy pretending to be a statue in one of the rooms.  He has the ability to make his skin like stone, which would be kind of useful in my situation.  Happily, my combination of high charisma, intelligence, and wisdom means that these sorts of social encounters are a breeze now, and he gladly teaches me.  This gives me -1 to my AC, which in ye olde D&D terms, is a good thing.  No, I never understood AC or THAC0 fully.