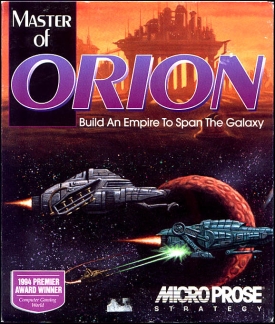 (This is part of my journey playing through Master of Orion.  You can follow the entire series on the Nostalgia Lanes page.)

I woke up this morning to check the final results of the most recent classic game safari poll, fully expecting to see Heroes of Might and Magic 3 on top as it had been.  Except it wasn’t: Master of Orion topped it by a single vote, so I’m heading to space instead of high fantasy.

This is a bit of a gaming homecoming for me.  Master of Orion was one of my absolute favorite titles to play during high school (1990 – 1994 A.D.) but it didn’t make the jump to college and I haven’t played it since.  I briefly tried MOO2 (it didn’t feel the same) and MOO3 was one of the biggest disappointments of all time.  Now that Wargaming.net snapped up the rights to the MOO franchise, it’s going to be very interesting to see if this will become a massively multiplayer title in the near future.

My love of MOO boiled down to this: It allowed me to experience my own story in a sci-fi setting.  I love 4X games (expand, exterminate, exploit, and exercise), but give me spaceships instead of barbarian hordes any day.  It helped that MOO had a pretty easy-to-understand tech tree, attractive graphics, and a save feature — so that I could experience a saga unfolding over the course of a week or more.

So let’s get back to it!

Compared to 4X games now, MOO has a pretty simple set-up: You can pick galaxy size (medium for me!), number of opponents (four), and difficulty (average).  Then I have a choice between several races, each with their own advantages.  I usually played Klackon back in the day because they really pumped out production numbers, but this time I’m going with Silicoid.  These guys don’t have to worry about hostile planet environments when settling, which gives them a huge advantage — no need to terriform or cherry-pick locations.

Man, I remember this era of computer games and how awesome I thought the graphics were.  You have to understand that computer games in the 80s were bland affairs, visually, with larger pixels.  By the early 90s, they got a lot more colorful, pixels got smaller (although they’re obviously very noticable), and some CGI started peeking in.

Now we can get down to the business of founding the Bio Break empire.  For Syp!  For glory!

As you can see, the interface is pretty straight-forward.  You make all of your decisions for a turn, including building, colonization, ship movement, and technical research.  Then you hit “next turn,” see what everyone else does, and repeat.  The key for the start of the game is to get your home planet growing fast (hence why industry is on full production), send out your one colony ship, and eventually start building a second colony ship.  You also get a pair of scouts that you can send out to look at systems around you. 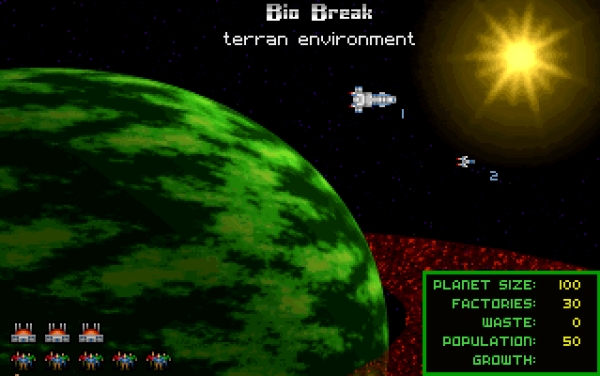 Again, I still love these visuals.  I think they’d fit in well with the retro craze going on in mobile gaming, don’t you?

Anyway, you always get a good starting planet, so here’s mine.  You can see factories and population at a quick glance, as well as whatever is orbiting at the time.

The larger map of the galaxy shows that, as a medium-sized game, I probably will be bumping into my four neighbors pretty quickly.  I need to press my advantage of being able to colonize anywhere to get a good base.  So I send my colony ship off right away with my two scouts checking out systems two and three.  ETA on all this is three turns.

Three turns go by and my colony ship arrives in the system.  It’s an arid planet that will only allow growth to 45 (million?  I’m guessing), but hey, a planet is a planet.  Let’s dub thee… 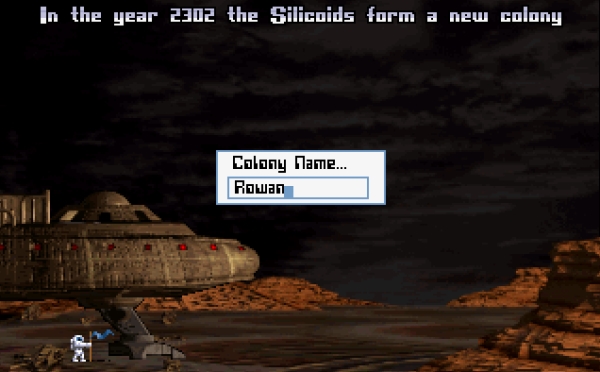 Oh yeah, I’m going with a “blogger” theme here.  I’m a little amused that my Silicoids, which don’t appear to have any arms or legs, are represented by an obvious humanoid in a spacesuit.  Dude, I don’t even need suits!

Then my first scout arrives at its destination to find an ocean planet that’s absolutely perfect for colonization.  Its population max is 105 and it is tagged as “ecologically fertile,” meaning that population growth is increased by 50%.  Argh!  I should’ve waited with that colony ship!  Oh well, for the time being I’m going to leave the scout to guard the planet and start work on a second ship.  Let’s just hope that no other races decide to swing by.

9 thoughts on “Master of Orion: A blast from my past”