(This is part of my journey playing through Master of Orion.  You can follow the entire series on the Nostalgia Lanes page.)

Rebellions.  Invasions.  Counter-attacks.  Falling behind in the technology war.  Spies destroying my factories.  This could be the moment when I shine or fall flat on my face and y’all get to say “HA ha!”

It’s not that I’m without my advantages.  Behold — THE GALAXY MAP:

As you can see, all of the other races COMBINED have about as many planets as I do.  The only empire with any sort of serious clout — the Alkari — are the ones constantly attacking me.  But what I’m hoping is that I’ve built up a bit of a firewall (for now) around my lower planets that I can settle back and out-tech/out-produce them all.  I just need a little more time.

My science nerds come up with a helpful scanner that allows me to spot enemy ships further out — and predict where they’re traveling.  This is enormously helpful, as I’m instantly able to see that Psychochild is due for another lashing:

I converge my fleets on Psychochild and tell the planet to start pumping up its planetary defenses (which, in this case, turns it into a non-moving ship that can fire a missile or two).  The incoming fleet is pretty severe, and if this goes badly, then my space force will be quite crippled.

Have I mentioned that I’m constantly saving over the same file so I can’t reload past turns?  Trying to keep myself honest, here.

The fleets meet and the battle is joined:

I’m starting to really regret investing in medium ships — these large ships the Alkari keep sending my way can take a pounding while whittling down my numbers.  Still, 138 Barracudas is nothing to sneeze at either! 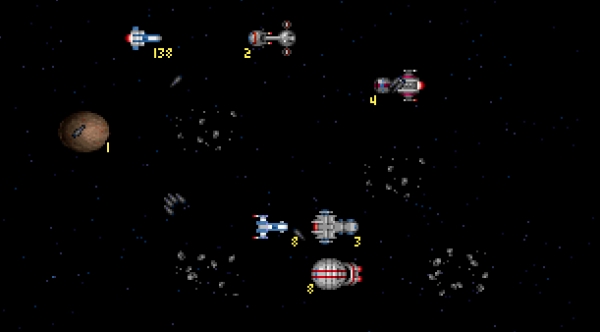 It’s probably the craziest fight I’ve had in this game yet.  The weird thing is that the AI isn’t too concerned with my ships, but makes a beeline for the planet to bomb it.  This gives me the opportunity to do some big damage.  Without losing more than three old Mantises, I take out around five large ships.  The fight and bombs gone out of them, the Alkari retreat.

I start production on a new large ship called the Stropp.  It doesn’t have ALL the latest and greatest, but it’s a substantial improvement on anything else I’m wielding.  I particularly like its shield-reducing gun and anti-missile defense.  The bad news is that it’ll take several turns to get any of these pumped out, particularly as I’m in the middle of another round of terraforming.

In the middle of intergalactic war, the planet Werit is re-colonized.  Hopefully it’ll do better this time around.

A nasty one-two-three punch is pulled on me in the next turn.  The Alkari attack Psychochild followed by a second attack by the main Darlok fleet, then the cat-people recall their ambassador and get all hissy with me.  While I’m able to fend off both attacks, my main fleet takes a bad pounding.  I really need those Stropps, fast.

The Alkari are just everywhere, with the screen littered with their fleets.  If the AI could think to just put them all together, the could probably steamroll a path right to the heart of my empire.  I think the only thing saving me are these half-hearted invasions.

Speaking of which, it’s Ocho’s turn to bat.  The Alkari do their normal thing — rush in, bomb the planet, destroy about half of my ships, retreat.  That’s fine, but a look over at Ysharros tells me one thing: I’m about to lose that planet.  The Alkari have the airspace, colony transports are en route, and there’s no way I can get anyone over there.  As it is, I probably need to just combine my battle-scarred fleets to make one semi-functional one, pick a planet, and defend it.

Ocho staves off another attack, leaving me with only 37 Barracudas at the end of it.  Ysharros’ population fights off its invasion, thanks again to HAND LASERS, but 15 million colonists aren’t going to be able to do much in the future.  I look in despair as 35 more troop transports descend the next turn.  My 15 colonists stand firm, and I give them a little pep talk.

Yes.  In my head.  But still.  It’s quite inspirational but I shan’t bore you with the word-by-word transcription.

That must’ve done the trick, because 15 colonists blast the ever-living crap out of those 35 birds, winning the day once again.  Of course, now I’m down to three.  It’s like a horror movie.

In a hilarious turn, the Darloks return to attack Psychochild, which has nary a ship in the sky.  Of course, it does have seven missile bases because I’ve been pouring all of that planet’s resources into making them, and the Darloks are nearly obliterated, the survivors stumbling over each other to retreat.

It’s helping me that the enemy is single-mindedly focusing on just three planets: Ysharros, Psychochild, and Ocho.  I only now have developed engines that move me more than one space a turn, so knowing in advance where to position my forces is quite helpful.  Thanks, bad guys!  The Alkari once again crash upon the rock of Psychochild, which is getting better the more defenses I have.  Plus, my main fleet arrives bearing the first two Stropps which, by the way, totally kick butt.

Even with new ion rifles, the six or so troops I had weren’t able to fend off the invaders.  I had totally forgotten that you can steal tech by invading, but there you go.  I’m a planet and a technology poorer than I was last turn.

Let’s have a moment of silence for this development.

4 thoughts on “Master of Orion: A requiem for Ysharros”