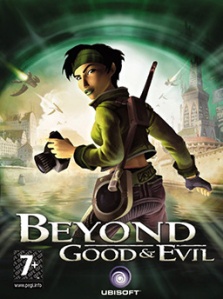 (This is part of my journey playing through Beyond Good & Evil.  You can follow the entire series on the Nostalgia Lanes page.)

As we move into the adventure game rotation of the Bio Break classic game safari, you guys have voted for me to check out Beyond Good & Evil.  This is an interesting title for this series for many reasons.  It’s probably the most recent (2003) that I’ll be playing for some time, it’s not just an adventure game but has platforming and stealth elements as well, and it has this weird cult following that loves to pop up from time to time to pronounce the incredible virtues of this title.

I do have a short history with BGE, as I played it part of the way through on the Xbox back in 2004 or so.  I don’t remember a lot about it, other than the fact that it had a strange setting — an alien planet with humans and animal-people and a kind of conspiracy plot.  So while there’s a history, it’s not a very deep one or an interesting one.  I can’t even remember why I didn’t complete it.  We’ll see if there’s enough “stickiness” to this title to compel me to play past the first two weeks as I head back into it, however!

The game begins on Hillys, a mining planet that’s come under attack by an alien force known as the DomZ.  I am, as always, an Asian photographer-slash-staff fighter named Jade, who alongside pig-dude Pey’j, is taking care of a bunch of orphans in a lighthouse.  Their night terrors are what powers the light, I guess.

The opening sequence is pretty action-packed.  The DomZ start falling from the sky and Jade makes a run for the lighthouse to activate the shield.  But wouldn’t ya know it, the power isn’t paid and the DomZ land and abduct the kids.  I ain’t standing for that, so I pick up a torch and start wailing away.  The combat in BGE, at least initially, is pretty simple: click, click, click for all your worth.  I smack all of the capsules open, only to be sucked down into a pit where that robot from The Navigator wants to have a one-on-one with me.

Does anyone else remember The Navigator?  Pee Wee Herman’s voice and time travel and shape-shifting spacecraft?  The 80s was truly the golden age of cinema.

Anyway, it’s a weird encounter because it seems like this eye is more interested in communicating than hurting me.  But Pey’j drops in and gives me my extend-o-staff (or whatever the game calls it), and I get back to clicking.  Here I learn the art of holding down a button until Link’s magic sword fully charges up for a super-attack. 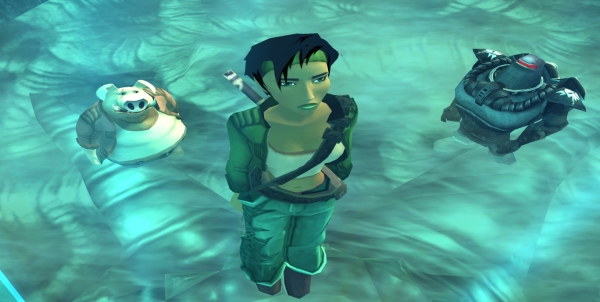 Right as we win, Alpha Force drops in.  These over-the-top studs are — according to Pey’j — almost suspiciously late to the party every time.  But they put on a good show, I guess.  Then, with nothing else to do in the tutorial, I faint.

I wake up in the lighthouse surrounded by a Tim Burton movie.  OK, it’s a 2003-era game so the polygons are a bit chunky, but you know what?  The use of colors and stylized art design really holds up well.  I keep thinking “World of Warcraft” as I go around.  That’s not a bad thing.

To make some scratch so that we can turn back on the power, I’m given the option (well, the facade of an option) to photograph creatures for a science place that’ll pay me for them.  Like the combat system, the photography system is pretty streamlined and easy to pick up.

I do a little poking around the lighthouse — it’s not very big — and the orphans mention that their parents aren’t dead, just abducted by the DomZ.  So… should I have let the kids be abducted as well?  At least the families could be together!

I’m quite curious what Jade and Pey’j’s story is.  Who are they?  Why did they get saddled with these kids?  Are these two grown-ups lovers?  Family?  Casual business acquaintances that are harvesting orphan tears to sell to the highest bidder?

After taking a few photos and getting the power restored, the game nudges me into Pey’j’s workshop.  This is the attractive half of Pey’j, by the way.  Man, what do they eat if pork and bacon are off the menu?

I finally find a save point and pause the game to continue later on.

One thought on “Beyond Good & Evil: A cult classic revisited”