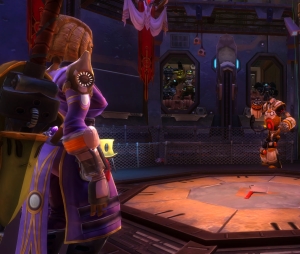 My general stance toward WildStar as of late has been fingers in the ears with a side dish of going “LA LA LA LA I CAN’T HEAR YOU CARBINE.”  It’s done wonders for my social life because I’m mostly surrounded by toddlers who talk in all caps as well.  It helps us relate.

I feel a dangerous urge to just start trying to gorge on all of the pre-launch scraps of information and speculation, and I know that that path lies madness because it’ll only slow time down.  Still, a recent article about shiphand missions caught my eye and got me to unplug my ears long enough to write a few words.

I am always in favor of games giving us choice when it comes to grouping.  I don’t want just one level (“You must group, period”) or even two (“Solo or hardcore raider”).  I like an array, because people group differently depending on available time, interest, and experience.  So, sure, throw in the raids and rich solo experience.  But also toss in challenging dungeons, path missions that can be shared, and pocket dungeons.  Now we’ve got shiphand missions which are an array unto themselves.

From what few details we’ve been given, we know that shiphand missions:

The latter gets a cheeky salute and a “good show, old chap!” from me.  The conundrum of a sci-fi MMO is that it’s really hard to justify by lore why you’re effectively grounding all of your players and giving them bipedal transportation when we in the real world have cars and planes and the occasional high-flying balloon.  But unless you’re prepared to spread your population across a galaxy and bother with individual planetary design, then you’re going to have to figure out how to work within some limits.

So shiphand missions seem like a good compromise.  We don’t get our own spaceships (alas), but we can get off Nexus to do a little space-hopping.  Even if it’s “just” an instance, it’s psychologically freeing.  And it kinda sounds cool.

Plus, this sort of grouping experience is just about perfect for me.  I often need something a shade less involved than a full-on dungeon run due to time constraints, and a flexible group size means that a guild doesn’t have to worry about fielding a five-person team each time.  Just put your hands up if interested and let’s go.  Have more than five?  Split into two teams of three or whatever and let’s go.

OK, fingers back in the ears.

4 thoughts on “WildStar: A group for all seasons”