(This is part of my journey playing through King’s Quest.  You can follow the entire series on the Nostalgia Lanes page.) 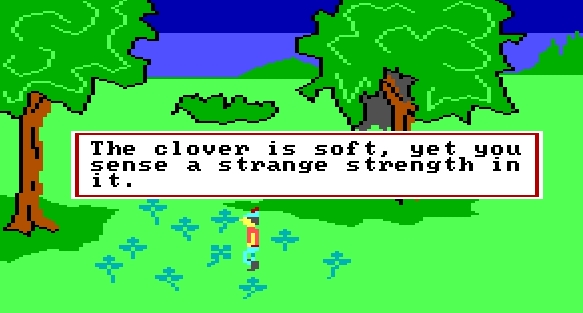 Clover Extra Strength: When wimpy normal clovers just won’t give enough luck so that your Final Four team wins.  And we’re off to the weird races in King’s Quest, as I pick up a four-leaf clover and continue my aimless searching of the land.

I come across a goat pen in the middle of nowhere with a — shocker — goat wandering around inside of it.  I open the gate and go in, then naturally try to take goat.  I say that as if it’s a normal thing to do, because we all know that in adventure games you’re supposed to take everything and in real life people frown on that sort of thing.  But the game won’t let me take goat.

Oh hey, look at that.  I’m a horrible human being.

He was coming right for me?  That’s what I’ll tell the jury, yes I will.  Oh well, at least I have a new profile picture for Facebook.

Hilariously enough, if I type in “look goat” the game tells me that the goat is “wandering this way and that.”  I think the game is in denial.  The game also won’t let me retrieve the dagger, so I had to reload.  Nice diversion, in any case.

My, my, that’s a nice well.   I cut the rope (hey, I should make a game about that!) and snag the bucket, then lower the rope so I can climb down.  Part of me wonders why I, a man with a golden egg, a golden walnut, and a bag of diamonds, am spelunking in a well instead of going to a fairy tale resort.

Due to the bleeding-edge graphics that 1983 had to offer, the climbing animation looks like crawling while a spike is skewered through my body.  At the bottom the game designers considerately offered me yet another chance to drown.

Seriously, Graham?  How have you lived long enough to reach puberty?  This kingdom has, at last count, like five major rivers, a lake, an ocean, a moat, and now this well.  Could you not have invested some time in swim lessons as a kid?  Or as the text here suggests, perhaps you did and “forgot how to swim” for some reason?

Ah.  Well.  My face is red.  Apparently it’s up to me to help Graham remember those swim lessons, because I needed to type “swim” and then “dive”.  He goes down into the surprisingly brightly-lit well, where Coca-Cola has a brief bit of product placement. 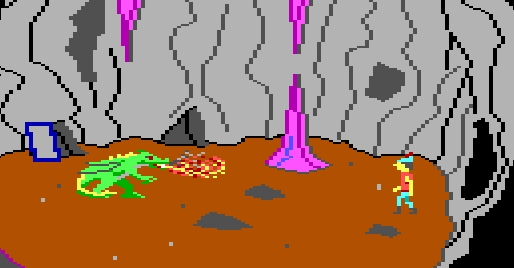 I emerge in a cave where a fast-moving fire-breathing dragon is making his rounds.  He’s guarding one of the three treasures that I need, so we’re going to have to use our hard-earned lessons on goat slaughter to win the day.

Side thought: It’s a real shame that fantasy video games after this one never brought back the whole dragon motif.  The possibilities would’ve been… well, repetitive, probably.

What?  Hey!  Not fair!  Nobody told me that dragon breath is dangerous!

This time… this time I’m going to fight fire… with not-fire!

I love this description.  “How mortified and embarrassed the dragon is!”  So mortified, in fact, that it overlooks the fact it could eat or disembowel me even without his flames back there.  And doesn’t he have a magic mirror?  Shouldn’t that have told him I was coming with a bucket of water?  And why does he live right next to a well full of water?

Oh well, I’ve killed a goat and made a dragon sulk.  It’s a good day in any case.

Wow, it’s like the mirror can read through the game’s code to find out what happens in the end!  That’s incredible!

5 thoughts on “King’s Quest: Of goats and dragons”