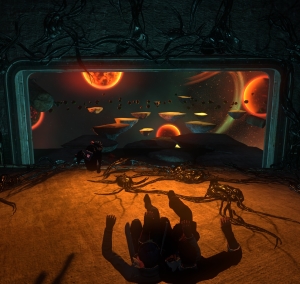 A few quick thoughts to round out Friday this week:

Of course, it stands to reason that the very week that I pick back up my Lore-master we should receive news that Turbine’s planning a pretty severe nerf of LM pets come Update 12.2.  Turbine’s not calling it “severe” but players on the test server kind of are.  That makes me a sad panda, because I was enjoying my super-beefed pets.  Hopefully they’ll still be pretty decent but, y’know, I’m worried.

Since I’m continuing my 2014 theme of trying new things and pushing myself to get outside of my comfort zone, I decided to make my LM a crafter as well.  I haven’t really done crafting in LOTRO outside of a few half-hearted attempts at farming and a run with scholar for my previous LM.  So I trained up woodworking and forestry with the possible goal of being able to make legendary staves some day.

I spent a couple of play sessions doing nothing but crafting to catch up to Moria levels.  Because I had more money than interest in roaming around early level zones picking up wood, I bought stacks of mats from the auction hall and sat back as my LM crafted for hours and hours.  Really, after seeing how Guild Wars 2 does this super-fast crafting thing when you have multiple items queued up, LOTRO’s slow-and-steady production was almost painful.  At least I could tab out and do other things while that was going on.  With the help of a generous kin member who donated two tiers’ worth of mats for my cause, I’m now up to Ilex wood that I can gather and craft from Moria.

The Knights of Mercy reconvened last night to get me through my final elite needed: the Facility.  It was also the first time I had run that particular instance and we had a great time — few wipes, memorable boss fights, a quick resolution.  Plus, at the end you can run full-tilt into this doorway and be flung back.  We tried hard to get screenshots of all five of us flying through the air but we weren’t quite that coordinated.

I took a few preliminary runs at the Gatekeeper just to see what that fight was like.  I had heard horror stories, especially from guildmate and leader Maric, who I think spent three curse-laden weeks trying to beat this guy.  He is not easy, that’s for sure.  I need to do some reading up and perhaps make a new build.

Oh!  Speaking on new builds, I whipped up a really fun all-turret/manifestation build that synergizes with the passive skill Big Bang (each attack by a turret/manifestation does an additional hit).  It’s so dang cool to lay three to five of these down at once and seeing how quick the mobs go down.

Now that I’ve been using the Kindle Paperwhite for a few days I have some follow-up thoughts.  For starters, it’s just been a great reading device.  The size and weight makes it ideal for me, as the iPhone screen is a little too small and the iPad has that weight.  I keep it next to my computer for reading during loading screens, reboots, couch time, and quality time in “the office.”  Yes, technology has advanced to the point where I can comfortably read and poop in the dark!  We truly live in a wonderous age.

So far the battery is holding up just fine, as I haven’t charged it since I first got it.  Probably my biggest complaint is the wake up switch — it’s small and not very easy to press with just one hand, so I have to hold the device with one hand and press it with the other.  It’s not a big issue, but it’s annoying even still.

I don’t know if I like how the device gives me a countdown of how long it’ll probably take me to finish the book.  It’s there at the bottom of the screen, sort of daring me.  Sometimes I find it a little distracting.

Two big RPG releases to tablets this week.  Baldur’s Gate II enhanced edition is out with just every expansion and addition that came out for that game.  Since I have it on GOG.com, I probably won’t be splurging $15 to get it.

Besides, I’m waiting for Final Fantasy VI to get into the app store.  It’s already out for Android and presumably is weaving its way through Apple’s approval process.  I wasn’t that aware of FF6 when I was a teen and considering that it’s many people’s favorite of the series, I do want to give it a good play.