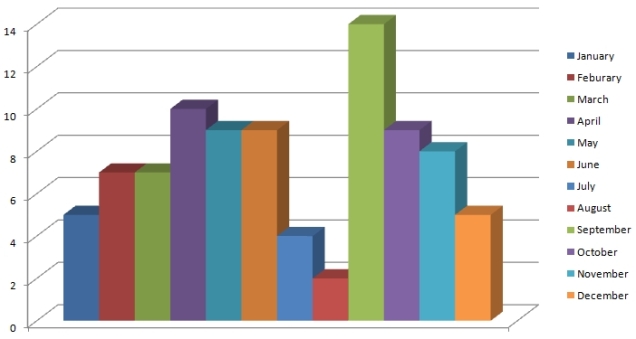 On a lark, I added up all of the MMO releases that I have listed on the Timeline page into a spreadsheet to see what it looked like as a graph.  Right here is a list of most of the major MMO launches from 1997 through 2013 by month.

September is the clear winner here with 14 followed by April with 10.  You can definitely see that there are two “humps” during the year that have a better-than-average chance of hosting releases: the spring (April-June) and fall (September-November).  The July-August lull is especially low (August has only seen two major MMO releases) followed by a more healthy December-January lull.

Really, no big surprises here, I just thought it was interesting to look at.  Considering that two major releases this year — ESO and Destiny — are slated for April and September, respectively, it looks as though this pattern will continue.

My money for WildStar is June, with Warlords of Draenor in November.  I also think Landmark will transition out of beta into a fully launched version in August.

*Note: I didn’t include relaunches, such as Final Fantasy XIV’s relaunch last year, or shifts in business format (i.e. a free-to-play launch).