With the WildStar beta weekend and the new patch boasting additional body options and hairstyles, I knew I had to make it my goal to log in and work on my future characters’ looks.  Here’s the crew of possibles that I whipped up, one for each race of the Exile (I’ll do Dominion later on): 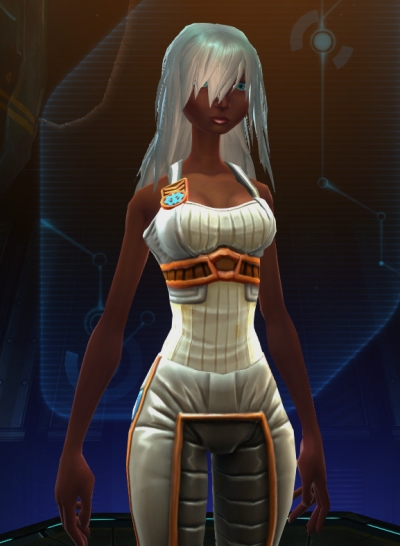 Here’s my Exile Human.  Going with the darkest skin option + platinum hair look that I loved on my Draenei back in World of Warcraft.  Long, messy hair over the eyes and a more reserved face to give her an aura of shyness — but I envision her being extremely competant even so.  I chose the most realistic body type that was on the list.

I might have flirted with the idea of rolling an Aurin in the past, but I think I’m well over that.  There are simply no good female Aurin looks — the faces are beyond bizarre and the body types now come in “anorexic, super-anorexic, and chunky monkey.”  So here’s my Fraggle Rock male Aurin instead.  I like how he looks so ticked off at the flowers in his hair.

I’m willing to bet that female Granoks will be one of the least rolled race/gender combos in the game.  Yet I’m actually taking a shine to what I came up with here, kind of an 80s-inspired glam rocker made of rock.  I like lavender and the body type here is a good balance between too huge and too skinny.

Lots of very off-putting options with Mordesh females.  I don’t mind making them weird, but too many of these are too grotesque instead of fun.  So I went with this psuedo-goth, relatively un-tubed look.  Maybe the guys have better options, that’s how it is sometimes.