(This is part of my journey playing through Gabriel Knight 2: The Beast Within. You can follow the entire series on the Nostalgia Lane page.)

No jail cell can hold the incredible Gabriel Knight!  He does a Die Hard through the vents and gets out of the prop room. 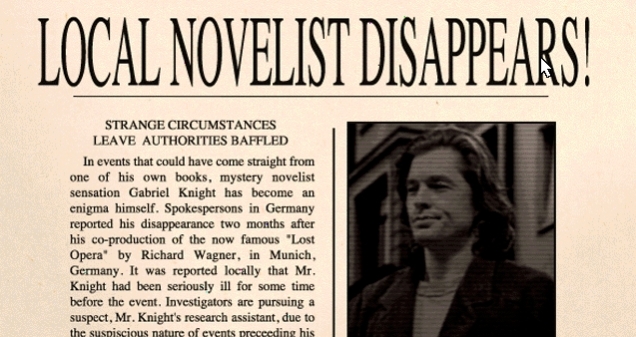 Gabe went inside a dressing room and farted around for a bit — a bit too long, actually, as he’s discovered and the game abruptly ends.  How did he disappear, exactly?  Wouldn’t he just be ushered out of the room? 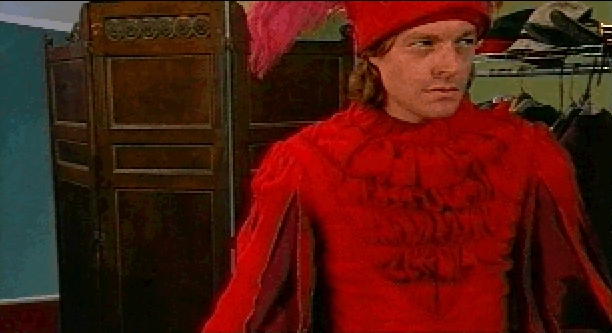 I try again and change Gabe into this… thing.  He’s going to have to kick his own butt now and he looks none too happy for it.

Gabe adds to his list of felonies that will never be prosecuted by tying up an innocent actor and taking his place on the stage.

Thus begins the longest cutscene in the game that’s 95% opera singing and Gabe coming in to clown around as a minstrel who can’t do anything right but seems to be amusing the audience anyway.  Above is a picture of the actor regretting his life choices.

It just goes on… and on… and on.  The music is OK, I guess, but I’m not a big fan of opera.  Right now, kids in 1994 are so happy that they badgered their moms to buy this werewolf game for them.

Eventually the music prompts the transformation of both Von Glower and Gabriel, although the game doesn’t ever show the transformation itself.  Both werewolves flee to the basement and begin a game of cat and mouse.  Or dog and dog.  Whatever.

Eventually both wolves, Grace, and the Komissar end up in the furnace room.  Gabe and Grace switch back and forth to work out a plan that involves knocking Von Glower into the furnace before Gabriel is shot. 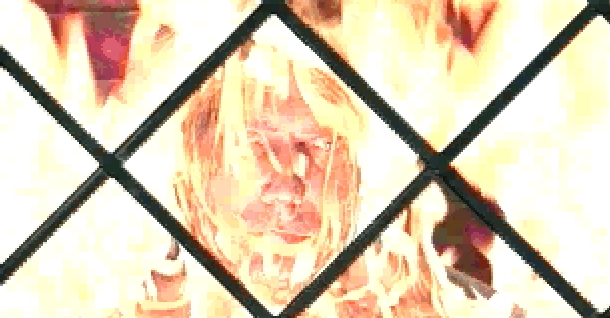 Once inside the furnace, Von Glower looks surprisingly sanguine about being burned alive.  Or melted, as the game portrays him.  Werewolves melt?  Yes, because of all of the plastic hair.  I can only imagine the horror of the Komissar feels as he watches a person burn alive that he didn’t save, but oh well, we won the game! 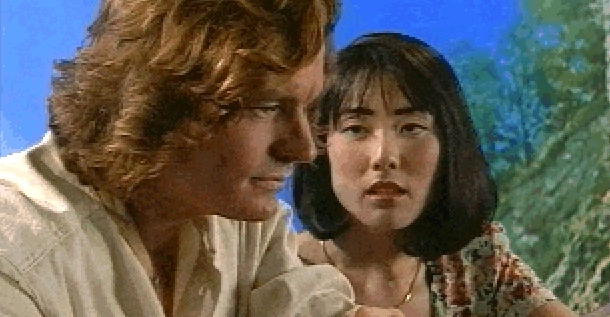 Wow… that was one long, long playthrough!  Thanks to all of you who stuck with me on this — I really didn’t anticipate it going for so long, but I wanted to see how it shook out.

Overall, Gabriel Knight 2: The Beast Within is a solid adventure title that is hampered and dated by its decision to use FMV.  Oddly enough, in 2014, Gabriel Knight 1 ends up being more timeless for its visual style, whereas GK2 looks like some sort of weird relic that combines adventure game mechanics with bad after school special acting.  The actors do a decent job, but the way that they have to keep pausing to allow for player decisions and dialogue choices is decidedly awkward, and many actions that you take are stretched out far longer than they should due to the director wanting to show every action acted out.  So the FMV is a severe strike against the game, as is the oh-so-cheesy music.

That said, I wouldn’t write it off.  As I’ve indicated, blending werewolves, Bavarian history, and opera together is an amazing feat of storytelling.  None of the “twists” were that startling, but I came out of the game definitely knowing more about Ludwig II than I did going into it.  Sometimes the dialogue is amusing and Xavier kind of rocked the house.  There are only a couple of puzzles that frustrated, including the final bit where you’re a first-person perspective werewolf running around the basement closing doors and wishing that you weren’t subject to motion sickness.

I appreciated the bouncing back and forth between the two main characters.  Despite my ribbing, Grace is a good character who is treated with respect instead of a floozy love interest (it helped that this game was directed by female Jane Jensen).  Gabe is more annoying than likable, but he does the plot justice and I’ll leave it at that.