(This is part of my journey playing through Space Quest  III. You can follow the entire series on the Nostalgia Lane page.)

How will Roger avoid being twisted up by an unstoppable droid assassin hell-bent on collecting 400,000 buckazoids?  By stopping it, obviously.

The game gives you 20 seconds or so of a head start before Arnoid starts coming for you.  He’s usually invisible, so you have to keep an eye out for his footprints.  Roger runs into the giant mechanical monster billboard at World ‘o Wonders and prepares for a nerve-wracking showdown.

Said showdown consists of swinging a pulley at Arnoid, which knocks him into the gears and… that’s that.  Not too hard, all things considered, and Roger gets a nifty invisibility belt out of the deal.  He’s earned it!

As a side note, I won’t tell you how many times I had to try to get that exact screenshot.  That’s it for this planet, so Roger blasts off and heads to Monolith Burger!

The Enterprise warps out right as Roger arrives.  This has to be one of the first “friendly” destinations that I’ve experienced in this series to date.  I remember that this was the highlight of the game when I was a kid, maybe due to the cheery music and lack of things trying to peel my face off.

The game descriptions tries to pass this place off as a boring fast food franchise location, but who are they kidding?  This is awesome!  Roger’s gonna buy fries with EVERYTHING.

The only way to die here is to keep walking into this airlock after being warned.  An alien (?) in a black spacesuit shoots roger on the second try.  Plus, he calls Roger a geek and names hurt worse than pulse pistols. 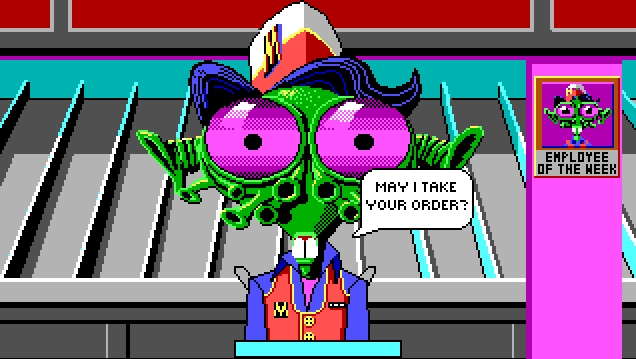 I love this alien design.  How can you not?  It’s such a great take on the nerdy acne-ridden teenage fast food worker.

This made me laugh darn hard.  He keeps trying to sell you more add-ons as his face looms closer and closer in the dialogue window.  YES I WOULD LIKE EVERYTHING.

Roger spends 14 buckazoids on his meal and wolfs it down (with amusing animations).  The food ain’t that great, but he finds a secret decoder ring inside.  Sweet!