(This is part of my journey playing through Space Quest IV. You can follow the entire series on the Nostalgia Lane page.)

After an extended stay in Space Quest X, Roger and his stolen time pod leap through the chronostream and lands in… in…

Space Quest I, baby!  Ulence Flats, how I’ve missed you!

In a neat touch, the devs recreate the setting with the vintage EGA-era graphics while Roger and the time pod remain firmly in SVGA territory.  It’s like a before and after shot, all in one! 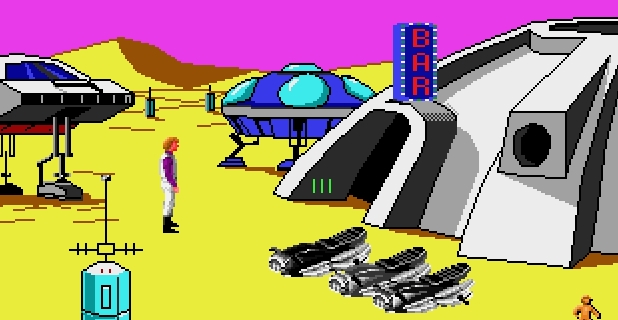 This is just too hilarious, especially for a guy who just played Space Quest 1, what, a month ago?  Roger is awash in wonderment, let me tell you.

The slot machine might be gone, but the ol’ bar is pretty much the same.  There is a motley crew of greyscaled aliens hanging out here, however.  Guess I should be a gentleman and say hi.  And swipe those matches.

The monochrome aliens are less-than-thrilled with Roger’s gaudy display of 256 colors.  I think they would be dismayed about how many colors we can display today (258!) in modern games.  They kick Roger out on his butt.

And because Roger is just a janitor with no moral compunctions, he kicks over the aliens’ bikes and runs away laughing.  The aliens take off in hot pursuit, but Roger doubles back, gets the matchbook (the ENTIRE reason of coming to this time period, by the way), and hops back in his time pod for a return to Space Quest XII…