This is Gozen.  Gozen has been in love.  And Gozen thinks that her past love affair is a really good reason to send us players on a silly mission across a Filth-infested Tokyo to deliver some origami book to someone who stood up someone else in her restaurant.  Sorry Gozen, but as far as quest motivations go, I am really not buying this one.

Anyway, our weekly Secret World group was incredibly excited to do this new investigation quest, Love and Origami, because, y’know, origami!  I used to be huge into origami back in… uh… 2003 or so?  Like, I have a shelf full of origami books and those origami-of-the-day calendars.  It was fun and I regret getting out of the habit.  But any opportunity to do an MMO mission in which we had to make cute little paper critters in real life, that had to be worth something, yes?

So imagine our disappointment when the quest really boils down to a series of translation challenges.  I mean, there’s a loose theme of origami, but you never have to make one.  You just need to keep translating kanji, which we did via Google Translate’s neat tool that lets you doodle characters and create them for you.  So we hunkered down to do a mess of translating, and by “we” I mean “other people in the group because I was making origami because darn it, I’m not going to bed until I make a paper animal.” 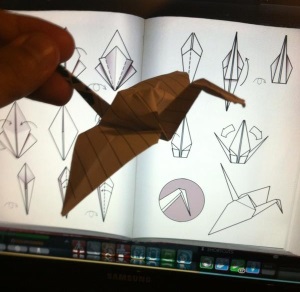 Aww isn’t it beautiful?  It’s nice of TSW to give players an in-game guide to many origami folds, I just wish it had been a part of the mission instead of its motif.

The story also ended very anticlimacticaly, with us finding the final origami and getting some juicy rewards.  We did discover that the guy who stood the girl up at the bar was the crazy kid from the main storyline, the guy who is in the apartment with a tin foil hat and all that.  That’s interesting, but it really illustrates how TSW needs closing cutscenes to tie up these missions instead of just ending abruptly as they often do outside of the main storyline.  Stories need good endings, people!

3 thoughts on “TSW: So someone at Funcom is a big origami nerd”