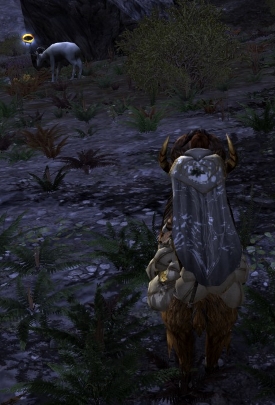 It never ceases to amaze me how a little sabbatical can bring back my appreciation for LOTRO.  Affection can go dormant, like embers after a burning fire, but can always return after a time.

I was thinking about this last night when I was roaming around Gondor.  There’s something about this game and its world that always felt more real to me than many others, and perhaps that’s a feeling that’s earned only after an extensive history with a game.  My Captain isn’t merely going through the paces.  She’s been on such a long journey but still has the fire to see it through.

So it was comforting to get back into the groove of questing, exploring, and smacking bears with my two-hander.  Kin chat was hopping, mostly with a discussion over a semi-farcical male calendar that we debated making.  Short hairy men would be spot-on for a Middle-earth spread, don’t you think?

And even as I realize that the heyday of LOTRO is probably past (but one never knows about a future renaissance), it certainly doesn’t mean that everyone’s left or lost passion for this game.  For some folks that I see, LOTRO is all they play, and they are ears-deep in Update 14 with glee.

Even with the new class coming out this fall, I can’t imagine going through all of the leveling process again in the current climate.  Maybe back when I hadn’t done it so often and when more of my friends were playing, sure, but I don’t think I have it in me (or have the time) to do it all again.  I’m grateful that I’ve kept one character at the level cap so that I can see the journey through.

Every so often I engage in a pointless fantasy where I can return to a game at a specific point in time, usually around its launch, instead of playing it in the here and now.  Maybe it’s the atmosphere of newness and potential that only exists in those first months and the first year, or the fact that the community is leveling up together and discovering things at roughly the same time.  For example, I’ve been feeling a yearning to return to DDO as of late, but I would have no idea where to get plugged in to the current scene.  The present is unknown, but how it used to be in the past — when we had regular groups and I knew the content well — is familiar.  Again, there’s comfort in that.  Maybe I’m just a big comfort hog.

I miss LOTRO being on the tip of the daily tongues.  It still is in some quarters, but the store, the age, and the new shinies have pulled people away.  What used to be a family road trip has become a mostly solo adventure for me.  So I yearn for what was even as I go forward.

2 thoughts on “LOTRO: Echoes of the past”