(This is part of my journey playing through Quest for Glory 1. You can follow the entire series on the Nostalgia Lane page.)

I mentioned this a couple of times back in my Space Quest and King’s Quest playthroughs, but the Sierra games are a dream to use today.  They start up quick, have no qualms about letting you tab out (which some older games really do), and they save/load swiftly.  All of these make Quest for Glory an enjoyable gaming experience. 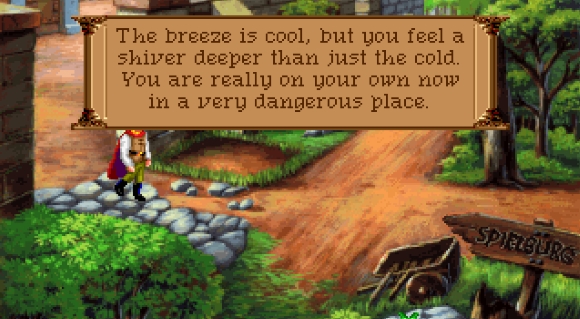 After three sessions (!) in town, I’m finally heading out into the wilderness.  About time, huh?  The road goes north, south, and east, so I pick east and walk down a quiet path until I hit a snowy avalanche and can progress no further.

Nah, I set it loose from the trap and the fox tells me the most random piece of quest information ever.  How would a fox know any of this?  And why is that “amusing?” 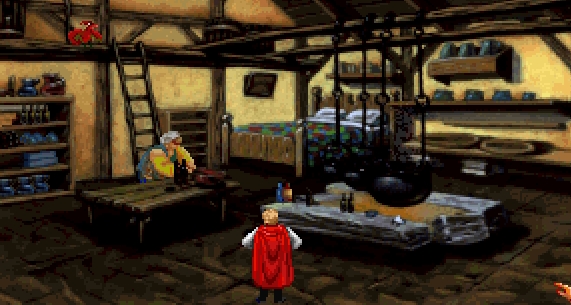 I turn and go up north, this time ending at the healer’s hut with her pet pteradactyl.  What century is this?  She not only makes potions, but has a quest for me: to find her gold ring.  Fair enough, healer.  I’ll be back with it in a jiffy. 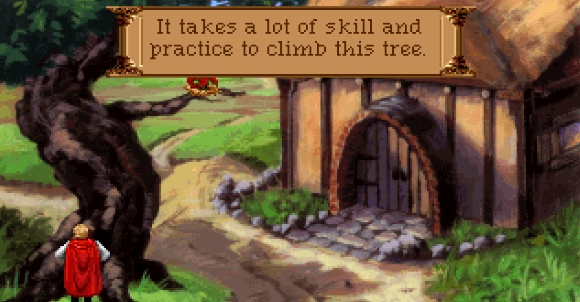 As I understand it, you increase your skill points in this game the more you use them (so there’s no traditional XP > leveling system).  So climbing this tree with my 0 skill requires me trying again and again and again.  This is the problem with skill-based systems, since you end up stopping your gameplay to do one action a million times in a row to level it up.  I remember the same crap in Morrowind.  Sigh.  Let’s get to this.

At 29 climbing skill, I finally make it all of the way up.  And what do I get for my efforts?

Well.  THAT was an easy quest, all things considered.

I head back in the hut and give the ring to the healer.  She’s so overjoyed that she not only gives me six gold and two healing potions, but she french kisses me on the spot.  It’s kind of hilarious how my character freaks out at this: “You leave to avoid being kissed again.”  Because fat people kissing you is torture, am I right?  But if it’s a hot little filly of a centaur, we can’t get a date fast enough.  Thanks, game.

Speaking of that centaur girl, her father is nearby doing farm work.  I’m pretty amused by this elaborate strap system that he’s got going on here.

I ask Heinrich the centaur about the brigand attack that nearly killed him a while back.  He said that they broke his leg and were about to kill him when their helmeted leader stopped them and carried Heinrich to the healer’s hut.  That is… odd, to say the least.  Who is this leader?

A little to the north is the Baron’s castle.  The big story behind the Baron is this: He used to have two kids and a wife.  But he got into a tiff with the Baba Yaga, who placed a curse on him and then arranged to have his daughter kidnapped by some sort of flying creature.  The Baroness died, the Baron’s son died, and the jester and several guards went out to try to rescue the girl.  But now it’s been many years and the girl — who should be 18 and well within dating range — is still missing, the Baron is holed up in his castle, there are few guards to keep the peace, and the land is going to muck.  What we need… is a hero.

Of course, this hero is a money-grubbing thief, so my primary concern is to increase my finances.  I am offered a job to clean the stables for a whopping five silver, but hey, I’ll take it.  Money is money. 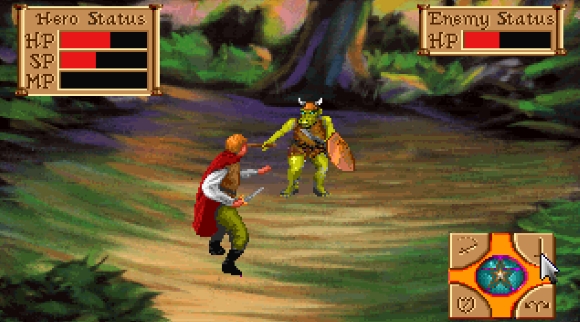 While wandering in the forest, I get into my first fight with a goblin… orc thing.  Let me tell you, I have NO idea what I’m doing here.  I just keep clicking the sword icon to attack and easily kill the creature.  Seven more silver for me, woohoo!

A second fight goes much more poorly.  Not only can you die from your hit points reaching zero, but you do the same when your SP (stamina points? skill points?) deplete.  Since attacks cost SP, I have enough for about one fight in me per rest.  Awesome. 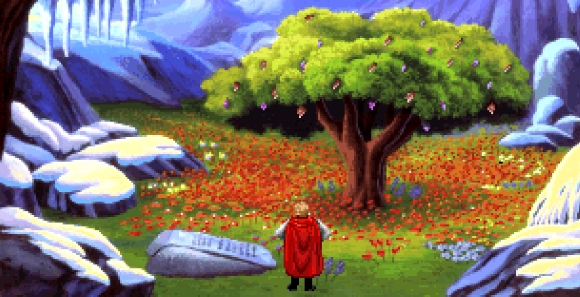 At least I find this little haven nestled in the woods: Erana’s Peace.  It says it’s a safe place, and it has both free food and a free bed for the night.  Sold!