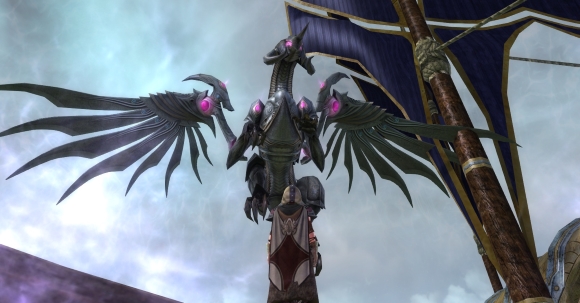 Things are moving fast now in the land of RIFT now that I’ve passed 50.  Jumping into Storm Legion content has been a significant boon to my character, not only in the quality of story, but in terms of gear upgrades.  I guess I forgot how much of a large increase it was from the vanilla game, but egads, practically everything I have has doubled from mere quest rewards.

On top of that, I finally have access to planar attunement (and had a few hundred PA points waiting for me when that happened), took a detour to grab Bernie from the Ember Isles, and can start running Storm Legion dungeons and assorted experts.

However, what’s making me the happiest is that Storm Legion has gotten a lot more leveling friendly since last I tread these grounds.  Story quest XP has been significantly increased, which lessens the need to grind out every last little carnage mission.  In fact, with that XP increase, XP vials that I’ve saved up, and various dungeon runs, I don’t think I’ll be doing anything BUT the main story to get through this expansion.  So far, I’ve gotten up to level 52 without breaking a sweat, and I’m actually tracking the story a lot better now that it’s not being broken up by tons of distracting tasks.

I decided to go the Brevane path for this character, as I recall enjoying these lands and quests a lot more than Dusken.  Navigating is a little annoying at times — jungle zones are typically some of the most obstacle-happy places in MMOs, and here is no different — but I’ll put up with it to explore a land of ancient technology that’s been abandoned.  Well, mostly abandoned if you factor in the ghosts hanging out.

For the most part I’m sticking with Bladedancer for most of my adventures, although I’ve been warming up to a full Ranger build as a long-distance alternative.  Sometimes I just don’t want to be running up to everything to attack, but would like the luxury of pointing at something 50 meters away and making it die.  My blood raptor, Jimmy, is invaluable in this regard.

I did feel vaguely guilty last night when a quest had me putting on a big boot to stealth-kick a fisherman into the mouth of a giant crocodile.  I guess he was an evil fisherman?  I didn’t really catch that, but his anguished screams and the subsequent way that the quest played it for laughs made me feel a little like a monster.  Ha ha, he died horribly from a sucker punch.  Aren’t I the hero.

4 thoughts on “RIFT: Ghosts and goblins”