(This is part of my journey playing through Indiana Jones and the Fate of Atlantis. You can follow the entire series on the Nostalgia Lane page.) 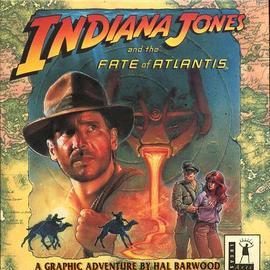 Last week, GOG.com finally struck a deal to sell several titles from the old Lucasfilm games archives, including one of my all-time favorites, Indiana Jones and the Fate of Atlantis.  When I heard this, I made a sound much like a cat giving birth to a litter under extreme duress, and jammed on the “BUY NOW” button before any internet lawyers could change their minds.  I won’t go into huge detail as to why I love this game (as I’ve done so both here and here), but suffice to say that it was one of the most memorable adventure games of my youth, and one that I’ve only played once and never since.

History… is about to change.  Let’s head back to the SCUMM engine and the best Indiana Jones video game ever made!  I can’t wait! 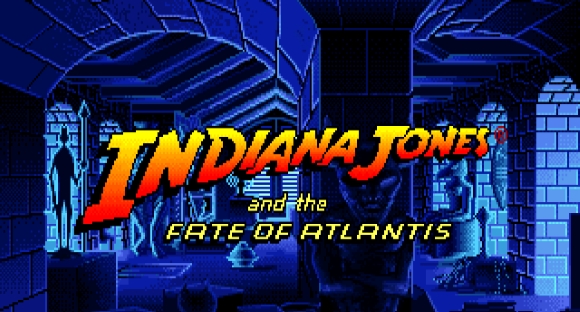 The game doesn’t mess around when you load it up — it immediately throws up the title and blasts out the classic Indiana Jones theme.  Even though this is vintage 1992-era MIDI music, it’s really well done.  I even downloaded the soundtrack the other day to give it a listen-through.

Right after the intro credits, Indy comes flying in with a crash into what looks like an ancient temple.  I totally did not remember that he was voice-acted (not by Harrison Ford, but by Doug Jones, who also did Indy in 1999’s Infernal Machine), which was a pleasant surprise.

Because this is the tutorial, the interface is stripped down to a mere cursor that allows me to send Indy to check out a variety of different objects in this room.  Indy moves quickly (which is really nice when you have a lot to check out) and offers up color commentary on the items.  It’s quickly apparent that none of these things fit together thematically, and Indy keeps mentioning Marcus.  And then, a “peculiar statue” triggers a trap door… 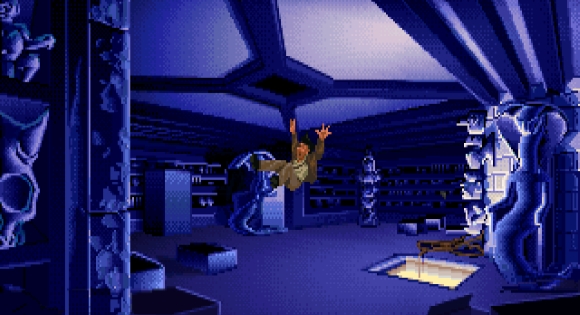 …and Indy falls into the next junk-laden room.  I love how while he’s momentarily knocked out, his fedora floats down and more credits play.  It’s a nice touch.

Attempting to use some coiled rope to go down a hole sends a totem pole crashing down on Indy, knocking him out yet again and sending him below to the next floor.  Our hero, ladies and gentlemen.

By now, it’s quite apparent that this isn’t some ancient temple at all, but a museum or some sort of 1940s storage facility.  And it’s also a death trap, because Indy can’t keep from knocking himself out.  Here, he has an entire bookshelf fall on top of him, which doesn’t crush him but pushes him through the floor (!) down to the next story.  How weak are these floors?  Or, I guess the better question is, how tough is Indy?

Siamese forgeries look on in disapproval as Indy distrubs their silence.  Not much to do here other than to take a trip down that inviting coal chute and hope that there isn’t a burning furnace at the end of it!  Actually, Indy doesn’t want to do that, so it takes clicking on all of the cats to find the one real cat to scare him into tripping backwards and going down the chute involuntarily.

An aside: So there’s a cat living in this museum on a floor with no access save one you make yourself?  And it likes to sit stock-still next to cat statues?  OK, Syp, you’re overthinking this. 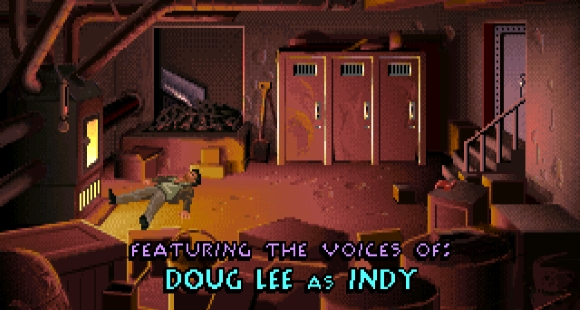 Indiana Jones has fallen down five stories and been knocked out four times in the past five minutes.  He probably has a major concussion at this point if not numerous fractures.  And no statue to show for it!

For some reason, the horned statue is in one of these lockers, suggesting that a coal-shoveling janitor wanted to take it home.  Maybe?  Indy brings his prize across the street at the college to Marcus and a “Mister Smith” who has a key that unlocks a compartment in the statue: 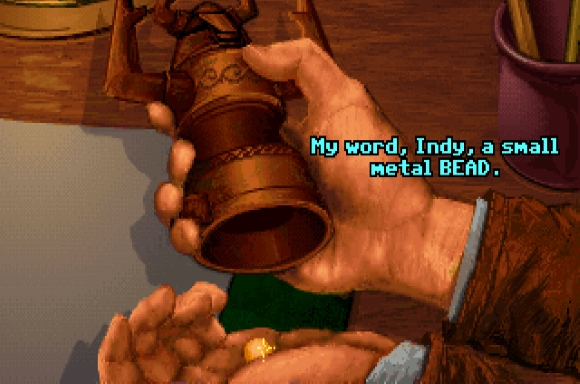 “Curse your sudden but inevitable betrayal!”

I can’t see why he doesn’t just pay for the statue or ask for the bead.  Was drawing a gun and taking this by force really your best plan?  Mister Smith tries to jump out of the window, although Indy catches his coat.  As Marcus is excited about beads, so Indy is thrilled that he got this guy’s outerwear.  Everyone has a fetish.

It turns out that “Mister Smith” is really a Nazi spy, although he’s the worst spy in the history of the world since he travels with his real passport (which he left behind) and a magazine in which he circled the targets of his investigation. 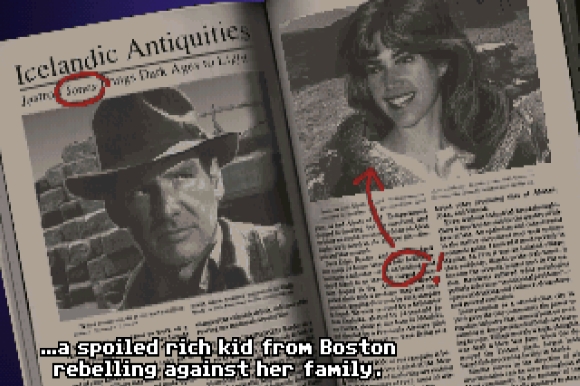 Good thing you circled “Jones.”  We might have missed it.

Indy is mystified as to what the spy would have wanted with that statue (which he says is old but doesn’t know where it’s from) and what this has to do with an old assistant of his, Sophia Hapgood.  She was a brat who evidently became a psychic and left archaeology.  If Sophia’s psychic job is anything like Indy’s archaeology hobby, she probably fights ghosts with a homemade plasma cannon while taking advice from her sidekick, Theodore Roosevelt’s spirit.

One thought on “Indiana Jones and the Fate of Atlantis: Tomb raider”