(This is part of my journey playing through The Temple of Elemental Evil. You can follow the entire series on the Retro Gaming page.)

One frog massacre later, and we’re ready to move on further into the moathouse.  Everyone have his or her own fingers and heads?  Good.  Let’s go.

Right inside the moathouse is a tower containing a very large, very perturbed spider.  At him, fellows! The spider venom not only hurts Whiteberry but takes away one of her abilities.  I don’t know which one, D&D 3.0 was always complicated to me.  Other than that bite, we get out of the fight without any casualties and then loot a nearby chest for some gold and goodies.  As a bonus, this tower is apparently a safe resting zone, so I select “rest until healed” and the game takes eight days to recover about six hit points (as well as my one cleric healing skill).  Being a lowbie stinks.  I don’t even know if I have any magic attacks other than my cleric!

The second we step into the courtyard, we’re ambushed by about seven brigands.  I have to say, I got really worried about this fight just by seeing the numbers of foes.  But then I forgot the upside of newbie D&D, which is that it’s not your traditional MMO hit point exchange.  Sometimes — a lot of times — attacks from low-level mobs don’t land at all.  I get through the entire fight with only suffering a single HP of damage to Zert, and that was because he walked through an attack of opportunity zone (if you pass near a mob without stopping, they get a free attack on you).  We get a little bit of loot and some confidence and move on. I want to mention that while ToEE is still an isometric D&D game, it’s very obvious that there were a lot of graphical upgrades compared to the old Icewind Dale/Baldur’s Gate engine.  Characters are so much more detailed and have a lot more animation, especially while fighting.  It comes across as something between Diablo II and III.

Inside the moathouse proper, a parade of dire rats come out to say hello, but oddly enough, they don’t attack.  Fine with me.  Let’s plunder this place! 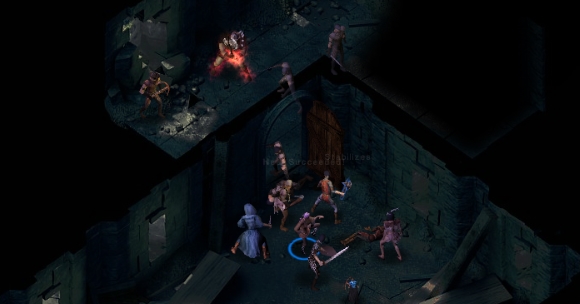 Oops, plundering is going to have to wait until later.  First there’s a giant viper, followed by a (why not) giant tick, followed by a pack of bandits with their leader.  This latter fight is the trickiest yet in this game, mostly because we have the chokepoint of the doorway and a few strong attackers.  Two of my characters get knocked unconscious, but I manage to stabilize their bleeding and heal them back to functionality. Can I say how much I love my monk?  Her spin kicks of death are so dang awesome.  Bandit ’bout near exploded.

The basement of the moathouse is in better shape, although the hodge-podge of picks from the monster manual continues.  Zombies?  Giant ogre?  Green slime?  Sure, why not.  Makes total sense why a pack of brigands moved in.  “Larry, if you’re going to go pee in the basement, make sure you avoid the door on the left, as that is where the cannibalistic undead live.  Also, don’t pee too loudly, as the ogre will take that as a mating call.” Also, thank goodness for Turn Undead against packs of zombies.  Stunned a bunch of them so that my party wasn’t completely overrun, and even then both of our healers got knocked unconscious.  Zert also gets a disease, the Red Ache.  I don’t even know what to do for this.

A secret ladder in the zombie area leads us down into the catacombs, where a few waves of ghouls await.  They’re quickly dispatched, at which most of my party gains a level.  Wahhoo!  I am… level 2.  Man, D&D is hard to adjust to when you come from the MMO world.

One thought on “Temple of Elemental Evil: The giant tick”