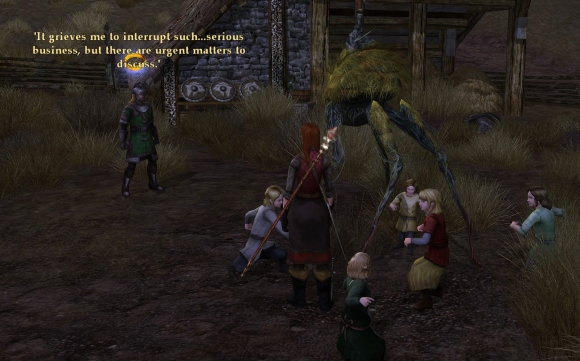 While I didn’t intentionally plan it, this past month of my life has been dominated by one theme: streamlining.  I think it needed to happen; my life was getting so full of “stuff” — projects, mostly — that I needed to scale back, cut the superfluous stuff, and rethink how I gamed.  I’ve already talked about how I’m just not worrying about being a full completionist (with SWTOR’s datacrons/gear or LOTRO’s virtues), and you’ve probably noticed that I’ve stopped doing retro gaming posts (they were getting to be more stressful to do and I wanted to focus more on MMOs).

And while I’m still samping a ton of MMOs — six or seven concurrent titles — I’m not stressing out about giving them equal time or sticking to a schedule.  I’m more of the attitude of, “Huh, what do I want to play and haven’t written about in a while?”  That’s actually been a blast.  Even better is the decision to return to games with more traditional combat models (RIFT, SWTOR, LOTRO) and cut out the action combat that was more work than fun to play (WildStar).

That’s why I deeply appreciate LOTRO each and every time I log in: It is simply relaxing.  Yes, I’m saving the world and combating ALL THE EVIL that you think Mordor would have a bounty out for my head and be calling me “The Flashy Death” or somesuch, but I’m doing it at my own pace while sitting back and cruising through the quest lines.

LOTRO isn’t what you’d exactly call challenging, unless you’re either running a hard instance or severely gimp yourself, but I don’t miss it — at least not in this game.  And playing as a Lore-master almost seems like god mode.  Remember when I lamented that when it comes to combat, what I really want is to point at a critter and have it die?  That’s pretty close to what happens here.  Summon my bog-guardian, tag a bunch of mobs, and optionally participate in their assured destruction.  Alternately, I can use my awesome “Sic ‘Em!” skill to summon all of my pets and wade into a group of bad guys to see them taken down within seconds.  It’s satisfying like popping bubble wrap, if the bubble wrap were fictional people with families, dreams, and a heart set on world domination.

Okay, so moving on from that topic, let’s talk about how my Lore-master failed to bring down a Nazgul.  It’s not my fault, it’s some dev at Turbine that won’t take the training wheels off of my staff and let me have a swing at the big boys.  Instead, I’ll be killing worms and pigs until my dying day because of helicopter developing.

This came about from the whole Langhold storyline.  My LM is still in the early days of her Rohan adventures, and it continues to be a treat to discover how many well-crafted story experiences exist (it’s been a couple of years, so pardon my faulty memory.  I should blog about such things so that I don’t forget.).

While short, the Langhold section is remarkably effective as an introduction to Rohan and to make me feel rather ineffective in my quest to actually help people (this will be a recurring theme throughout the entire country, if I recall my past adventures).  First I’m sent to do the typical “new to a town in an RPG” stuff — meet the mayor (Thane), figure out where vendors are, and snap up quests.  But things soon quickly turn for the worse as a casual recon mission discovers a small army of invaders who have the cooperation of a Ringwraith.  That’s kind of like an ultimate trump card unless you have a handy Elf-controlled river nearby that’s willing to flood the region just to take out a bad guy.

/slaps down Nazgul card.  “You lose.”

So while the mission did the LOTRO thing of refusing to allow me to fight the big evil lest I tear a hole in the lore so big that an endless stream of fanboys and girls pour out, I’m told to tuck tail and run.  While I feel that this is a little cheap (as is every time that a game wrests control away from me and makes me fail as a default just to keep the story in line), the chaos and effects did a great job of selling the destruction of the small village.

It’s a solid introduction to the plight of Rohan and the fact that no matter how many rats you kill, sometimes you just can’t stop evil from happening on a larger scale.  Sometimes you fight a series of tactical retreats so that you can be in a position to win on your own terms.

8 thoughts on “LOTRO: The relaxing way to save the world”