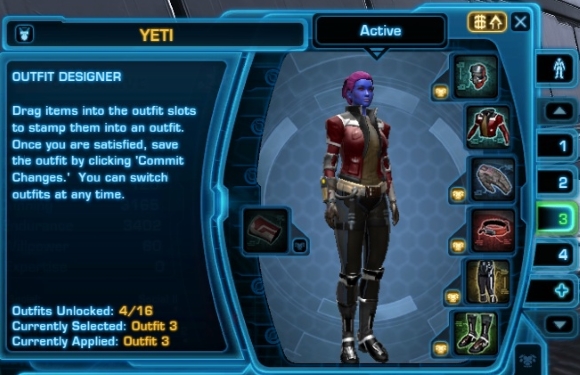 What I don’t understand sometimes is how developers, when looking to design a certain system for their MMOs, can look at gold standard examples elsewhere and then go, “I know! Let’s make ours worse than those!”

You might recall how impressed I was with RIFT’s recent overhaul of its wardrobe system, which combines functionality with extreme ease of access. I’ve been waiting to see how SWTOR and WildStar did with their new wardrobes, and while WildStar has yet to reveal its, SWTOR popped out the costume designer with this week’s 3.2 patch.

And it is… subpar.

Oh, don’t get me wrong, it’s way, way better than the fiddly adaptive armor that the game’s struggled with since release. And something is better than nothing. But overall it’s definitely behind the curve of some of the better examples in the industry (RIFT, Guild Wars 2, LOTRO, EverQuest II).

Let’s start with the positives, because I’m all about being fair. The costume designer is instantly accessible in the character UI (no finding a certain NPC for this) and allows for up to 16 saved outfit slots, which is 15 more than Guild Wars 2 offers. And for a free-to-play player, I was happy to see that buying new slots could be done fairly cheaply with credits.

It also works for what it does, allowing you to drag over a real piece of gear into a slot to “stamp” it while keeping the gear elsewhere. Despite what BioWare claims, this doesn’t really save me on inventory — I still have to hang on to that gear in my increasingly cluttered cargo bay if I want to use it again elsewhere — but it does work. Putting together an outfit and swapping between what you’re wearing is just a button click away.

I was pleased to see that BioWare’s opened up the field to use pretty much any piece of armor (although not weapons) for cosmetics, including your standard greens. And while allowing players to now use any armor class for cosmetics seems to have upset some of my guildies (who felt strongly that it took away from the uniqueness of certain classes), I was cheering a widened array of options. In this area, SWTOR actually has a leg up over GW2, the latter of which is still armor-class restricted.

But for every step forward, there are a few taken back with this system. Dyeing armor pieces is still handled in the awkward “you have to slot an item into a chest piece” fashion instead of taking a cue from RIFT/GW2 by allowing easy access to colors in the designer itself. And since the designer doesn’t let you unify to chest colors while putting together outfits (you have to be wearing the outfit and then click that button), it’s sometimes hard to tell what the color scheme will end up being.

I wish that the game took a cue from RIFT/GW2/LOTRO by storing cosmetic gear in an inventory-free unlockable screen so that you could easily select pieces while building an outfit. Instead, I had to open up my cargo bay, preview through pieces, transfer the gear to my inventory, then stamp it from my inventory into the costume designer. WAY too many steps. WAY too cumbersome.

The kicker is that BioWare, in its infinite wisdom, decided that the costume designer also had to be a money sink. OK, it’s not going to make me go broke, but I couldn’t help but be resentful that every item I slotted would cost me credits. At least it’s credits and not cartel coins, but it does leave a sour taste in my mouth.

At least for my efforts I now have a selection of outfits from which to choose in my adventures. It’s just a shame that what could’ve been a top-of-the-line ride ended up being a servicable economy car.