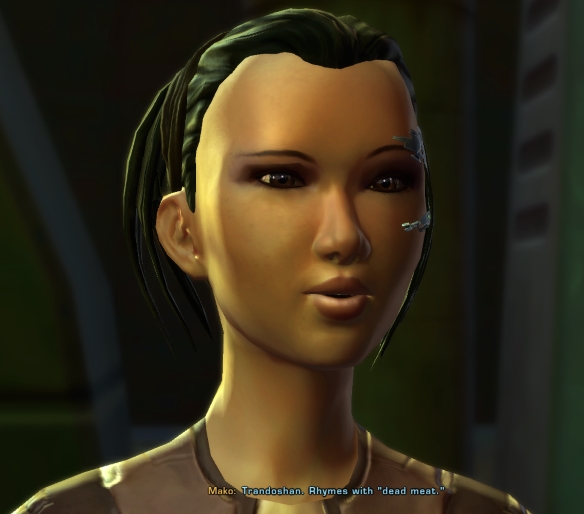 At the SWTOR endgame, it kind of stinks that your interaction with your companions is limited to finishing up their storylines and the occasional combat quote they throw out. Going through the bounty hunter storyline is reminding me of how fun it is to have a companion there for color, commentary, and even ethical influence. 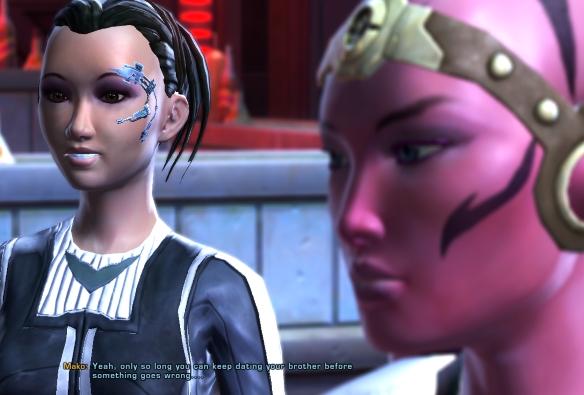 Hey look, that’s the new (third edition) Yeeti on the right there! I agonized over skin color, particularly the traditional blue, the movie green, or this bright pink/peach/red hue. Pink won out just to be different from the blue Chiss.

Also, it’s not a Star Wars story without some implied incest, right? 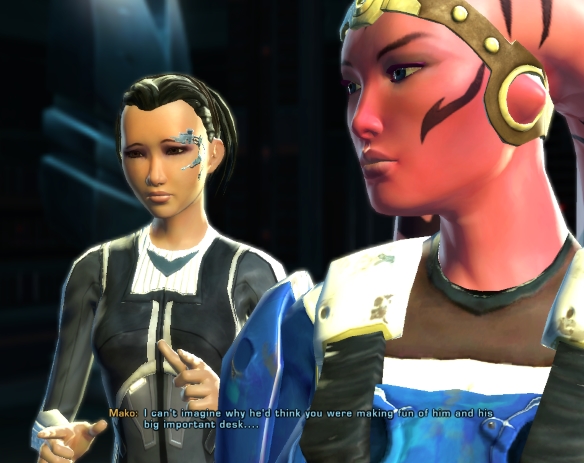 Star Wars: Big Important Desk of the Old Republic. I would totally play that.

I did try out the other Mako heads that I was offered early on in the personal story, but none of them fit her as well as this one.

When Mako isn’t there to be snarky during cutscenes, I’ve been sending her out on a non-stop series of crew mission runs. I figure that doing the 12x thing also means that I’m not going to be spending as much time on each planet and could easily outpace slicing node level requirements. I also picked up treasure hunting for when I get more companions, because I’m really going to need those companion gifts to make up for the lack of dialogue encounters that will offer influence points. Plus, it’s pretty amusing to me to send out the crew to bring back gifts that I’m going to be giving right back to them. Like handing a relative a gift card and telling them to go shop for their own birthday gift.

Financing all of those crew missions will be my operative’s task; I’ll get to do a bit of farming here and there. Got her well over a million credits the other night, which is nothing to regulars but was a first for me. Trying to decide how much money I’m going to be sinking into expanding and decking out my stronghold, as it’s been somewhat neglected.