I… don’t know what’s come over me. I really don’t. A few days ago, Project: Gorgon was that interesting indie MMO with a terribad name, and now I’ve become a Kickstarter supporter (my first pledge ever) while raving to anyone I can find about how innovative and clever and funny this title is. Maybe it needed the bad name and 2003-era graphics to ward the mainstream off, lest it be overrun beyond control? I don’t know, but I will tell you that merely going through the tutorial the other night severely impressed me with the potential on display.

I mean, most tutorials and beginner zones in MMOs are tame affairs with killing, a light story, and not much else. Here, I lived a full RPG life merely trying to get through a cave. That says something to me. 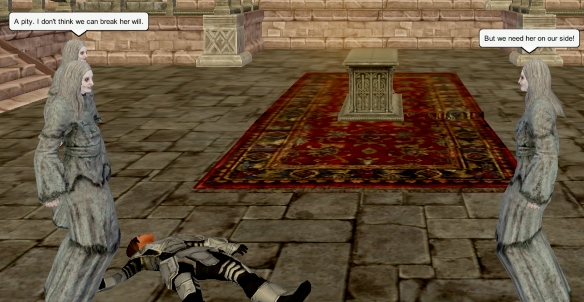 So this was a first in my MMO career: I was killed (knocked out?) on the character creation screen. Seriously. I clicked “create character” and she was gunned down by these creepy-looking women, all without changing the scene. I was shocked for a moment and then laughed my head off because it’s still possible to be surprised by these games. “Hi, welcome to our game! Now you’re dead!”

Project: Gorgon isn’t your same-old MMO. While it handles very similarly (hotbars, movement, etc.), what it really is is a skill-based RPG that is as much — or more — about exploration than combat. This is a game that wants you to go poking around and learning its insane number of skills, from mushroom picking to (I kid you not) dying. Yes, you can level up in dying.

It’s not going to win any beauty awards, although it’s not as hideous as some have claimed. Hopefully the new Kickstarter campaign will fund and provide for better graphics, because the core gameplay is surprisingly solid (and this for an alpha). You walk around, click on things, and see what options are available. Gradually, you pick up more skills and have more interactions with the world, from picking mushrooms to crafting spore bombs to taming rats to performing autopsies on corpses.

Again, this is all stuff you end up doing before you ever leave the tutorial. It’s beyond nutty. Oh, and if you get bored? There’s a mini-game in the menu that challenges you to find as many words within a big word before a time limit runs out. Just because.

This dead elf put another plus in the game’s favor.

So I slowly, methodically explored the tutorial cave. Some of the animations — jumping, particularly — felt very basic and slippery, although combat clicked for me. Speaking of, combat’s an interesting bag here. You can equip two schools of combat at any one time, with two six-slot hotbars offering skills from each. For example, I had both archery and sword fighting going, allowing for both ranged and melee attacks. Skills for the hotbars are gradually unlocked as you level up, and most are pretty self-explanatory. I really appreciated that targeting a creature and then hitting a skill would auto-move your character into range to use that skill.

As a twist, there’s a “rage” meter on enemies. Attack too often, and the meter tops out, giving the enemy a strong attack (for example, the skeletons will stun you). But you can empty out the rage meter with certain skills, such as parry. It’s clever and encourages a wider rotation.

Bosses in Project: Gorgon are nothing to mess with. Really. First of all, the game freaks you out by blaring a siren and showing a whole bunch of weird floating text that mostly makes no sense. This is your “intuition warning” telling you that a big bad is up ahead. The tutorial kept flashing warning text boxes at me too, informing me that bosses will not only kill me, but inflict (semi-)permanent curses that you generally don’t want. Then again, I’ve heard that a boss curses players by turning them into cows, which can then be played for the rest of the game. I SO WANT TO BE A COW YOU GUYS.

The only way you can clear a curse is to defeat the boss. I didn’t fight this boss, by the way. The number of player tombstones around convinced me that it wouldn’t be worth it, especially not knowing what curse was attached.

Let’s see… what else happened before I ended up leaving the cave? I almost have to make a bullet point list here:

Oh! Another neat feature is the NPC favor system. You can do quests and give gifts to NPCs to unlock… stuff, I guess. I was talking with this lady, did a quest for her and got a scroll with a clue how to beat a nearby trap. I noticed that there’s an option to “hang out” with her while I’m offline, granting me additional favor points with her when I come back.

Project: Gorgon is certainly weird and rough and full of meta-humor, but it gave me such a ride on that first night that I can’t wait to play it again. Finally, here’s a first-look video that I wanted to pass along if you want to get a quick overview: