(This is part of my journey going checking out Star Trek 25th Anniversary. You can follow the entire series on the Retro Gaming page.)

I really dig the episodic structure of Star Trek 25th Anniversary. It not only helps the game from being bogged down and makes one feel like they’re getting multiple games for the price of one, but it also helps me immensely by splitting the title up into easy-to-blog sections.

Here we go with the third episode, Love’s Labor Jeopardized. Admiral Homework comes on the screen to say that the research station Ark 7 is the target of a Romulan raid and we’d best get there ASAP.

Once there, the Romulans pop up for another one of the game’s tedious ship-to-ship battles. As with pretty much any adventure game trying to shoehorn in action bits, this part of the game is by far the most lacking. It’s made worse in this instance by the fact that the Romulan ship keeps cloaking, which means I can’t really do anything until it pops back up.

After the ship is destroyed, the Enterprise heads to Ark 7. An automated message warns of a biohazard, and a nearby Romulan ship suggests that there are still bad guys around. That’s just the way Kirk likes it.

Is it just me, or does the Romulan warbird there look like a bug that’s just gone *splat* all over the windshield of the station?

The station looks abandoned and the computer log mentions that there’s been a horrible accident involving a virus that affects both Vulcans and Romulans. At that, Spock says, “See ya later, suckas!” and beams back. Wait, no he doesn’t. But he really should.

Trying to go down a ladder nearly results in Kirk getting phasered by Romulans. Guess they’re content to hang out down there, so we’ll leave them be for the time being. Meanwhile, Spock starts coughing and McCoy remarks that he’s getting worse. Tell me that there isn’t a time limit on this mission!

Basically the mission is to try to find a cure for the virus before Spock and the Romulans bite it. It’s a somewhat tedious “science” mission with lots of synthesizing and gas-swapping and other things I won’t bore you with. As Kirk makes water as only a space-faring man can, his away team play Candy Crush on their smartphones.

McCoy shows grace and tact by cracking jokes as Spock is dying on his feet.

Eventually Kirk — not Spock or Bones — figures out the cure, gasses the Romulans, and makes all their boo-boos go away. 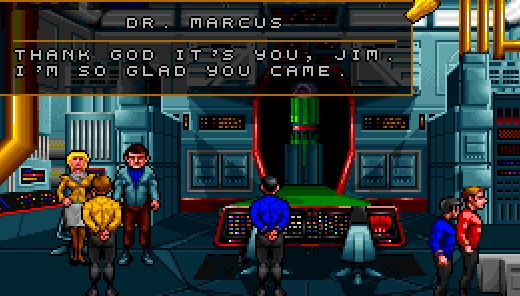 It’s only in the last 30 seconds that the name of the episode makes any sense, as this is Carol Macrus’ station and she and Kirk have a brief and somewhat awkward reunion. The game takes the opportunity to foreshadow Star Trek II a bit, but really, more could have been done with it. And more could have been done with that horrible Carol Marcus model.