(This is part of my journey going checking out Star Trek Judgment Rites. You can follow the entire series on the Retro Gaming page.)

The Enterprise is called in to investigate several ship disappearances in the Delphi system. And then the Enterprise was never heard from again, the end.

Naw, but that would be funny.

Trelane, probable member of the Q continuum and one of many, many god-like aliens that Kirk encountered. He was in the TOS episode “Squire of Gothos,” so I guess this can be seen as a sequel of sorts.

Trelane captures Kirk, Spock and McCoy and sends them into a cellar where they meet an officer (Lt. Cmdr. Redshirt) from another Starfleet ship.

Don’t tell me how many sticks I can possess, game! I want all the sticks! Do you hear me? ALL THE STICKS!

To pass the time, Kirk starts a raging fire near to boxes of alcohol. I love his pose here as the guard comes in: “Yeah, so the room is on fire. Whaddya gonna do about it?”

Spock nerve pinches him and the team leaves the guard to be burned alive (!).

They emerge in a WWI-era town where a vagrant is pimp-slapped down to the curb. Kirk goes up to him and returns the favor. “Having fun, Jim?” McCoy deadpans. Yes, yes he is.

Inside the tavern, Kirk learns that on this world, the Enterprise crew are hated enemies of this fictional WWI setting. I wonder if the “Leo” McCoy is a sly reference to Leonard Nimoy. Spock seems to find the name Leo funny in any case.

The front lines with a trench are a stone’s throw from the town, one of many weird inconsistencies that the team notes (not being hated by or arrested by the Germans is another). I mean, we all know that it’s an imaginary place made by Trelane, but I guess adventure games have to exhaust all narrative threads.

After Spock mind-melds with a soldier, the crew discovers that all of the people are actually crew members from the various ships with their thoughts altered by Trelane.

In older adventure games, they’d actually make you play real poker to win money, but here it happens automatically. And thank goodness — I never liked minigames in my adventure games. Kirk is now filthy rich. Also, I have a hunch that this redshirt is actually Trelane. Look at how sneaky he’s being.

So the crux of all of these activities are to locate and obtain Trelane’s “power objects” — it’s kind of like Harry Potter hunting down horcruxes. Never know where they are until you scan them, and getting them is usually a convoluted chain-favor deal.

There’s a funny little moment when Kirk takes an entire chalkboard and — somehow — shoves it into his inventory like it’s a magic trick. He then looks over his shoulder and shrugs as if to say, hey, it’s an adventure game. You have to accept this kind of thing.

After Kirk gets the three power objects, he stacks them in the fourth — the plane — and blows it all to hell with some TNT. Star Trek, everyone!

Trelane is not amused and subsequently summons the party to his castle for a showdown. What a twerp. 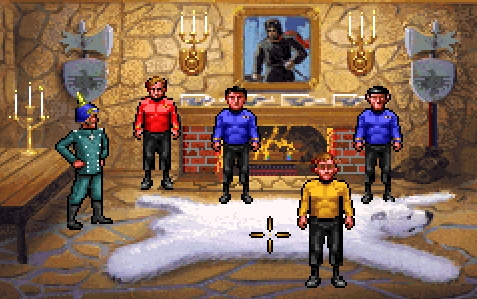 If you look closely at the above picture, you can see the missing starships — including the Enterprise — in those glass bottles. That’ll up their resell value.

Kirk encourages Trelane to look at the actual history of WWI and create a more accurate — and bloody — trench scene. There, he lectures Trelane about the true suffering and cost of war, trying to touch on a note of compassion in the weird space god. I guess he gets to Trelane, because the next thing you know Kirk is back on the Enterprise and all is well.

Episode 3 is a big step up from the previous one. Good setting, nice tie-in with the original series, even a narrative that moves along. It felt very much like a classic episode. I will say that by now I’m starting to realize that Judgment Rites’ episodes are way, way longer than 25th Anniversary’s, and that’s not even including the ship combat I’m skipping. This episode took me almost two hours to complete.