(This is part of my journey going checking out Star Trek Judgment Rites. You can follow the entire series on the Retro Gaming page.)

The Enterprise is finally off for some much-needed shore leave, but if you know anything about Star Trek, it’s that any attempts at taking vacations will always end up throwing the crew into some dire mission. In this case, Kirk gets a call from the admiral asking him to make a pit-stop to the planet’s Smithsonian wing to take part in a ceremony handing back a relic to the natives.

The museum’s curator is about as Star Trek Russian as Chekov (both Chekov and Scotty come along this time — Scotty because there’s booze involved). He lets Kirk walk around for a while before calling him back for a toast. 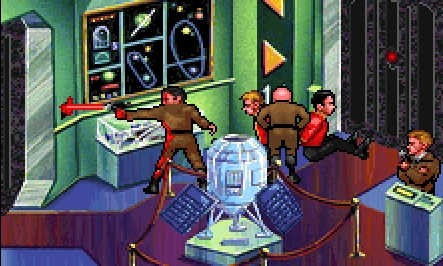 The toast is interrupted by a red alert — probably the first time in history that this place has seen a red alert. Looks like some bad guys are taking hostages and setting up shop in the special exhibit wing.

So what’s Kirk’s next step? Calling the Enterprise to send down a huge team of security to retake the museum by force? Nope. It’s to steal every single thing in this room that isn’t bolted down by pixel glue and then justify it because we’re in an adventure game. Emergency justification!

To get through a locked door, the team comes up with an idea to jury-rig up a mass driver cannon with a lance and some powered magnetic clamps. I won’t lie — this was pretty fun to do. KABOOM! 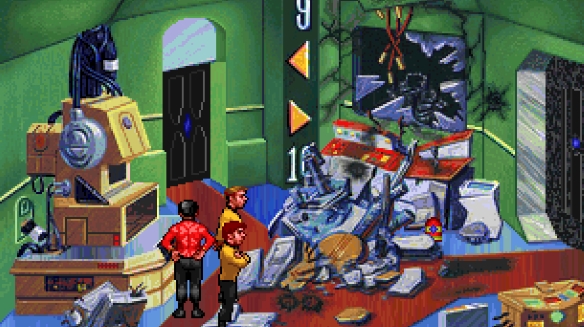 That’s the Kirk I know and love: The man who would gladly blow holes through a museum to win at any cost. Picard is rolling around in his grave.

Scotty makes friends with a little floating robot named Barney. In a cheeky 2001 reference, he asks Barney to open the pod bay door. Would have been even funnier if the robot refused.

To charge up our last battery, Scotty jury-rigs another device — but has to pour his beloved cognac into the pod to kickstart the battery. The liquor! The humanity! 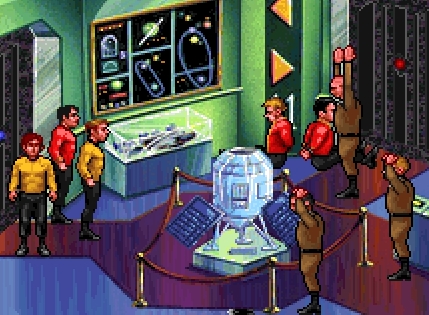 One last MacGuyverism before we leave this restful shore leave. Kirk and crew hook up an old communications device to negotiate with the terrorists. Apparently they’re cheesed that the Federation is giving this probe — a huge part of the planet’s history — to one faction instead of another. The terrorists say they’ll surrender if the Federation can mediate a better solution.

Kirk’s cool with that, because how else would he have been able to trash an entire museum and get a pat on the back from Starfleet?

Overall, this was a terrific mission: interesting locale, funny quips, challenging puzzles, and the addition of Scotty and Chekov to the mix. Best one of this game yet, I’d say.