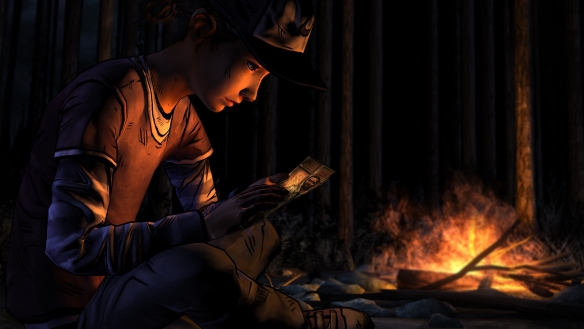 While the full game has been out for over a year, I only finished up Season 2 of Telltale’s Walking Dead last night (mostly because I’ve been doing it in short spurts while exercise biking). I wanted to wait until I was all done before writing down some thoughts on the season, so here goes.

Season Two transfers the role of the protagonist from Lee (who died at the end of Season One) to Clementine, now a bit older but still very much a kid. This was a risky move that didn’t quite pay off as the designers intended. While I applaud having the player take on the role of a smaller, weaker person in the midst of a zombie-ridden apocalypse, ultimately it is frustrating (she can’t do everything that the adults can) and contrived (why are the adults listening to her this much?). Plus, Clem’s personality isn’t as fleshed out and interesting as Lee’s was.

Likewise, the second season didn’t quite pay off as the writers probably hoped. While Season One was a gripping tale with moments of off-kilter beats and questionable developments, Season Two is a wildly inconsistent ride with a few genuinely poignant moments.

I think what aggravates me the most in the Walking Dead series as a whole is that the characters themselves can’t seem to stop being high-drama idiots who keep fighting and undercutting each other and perpetuating all sorts of horrors on each other now that civilization has collapsed. I won’t deny that a zombie apocalypse would be stressful, but this season couldn’t stop making everyone either a yelling maniac with poor decision skills or dead.

This is especially weird considering that a big theme of both games is the necessity of the group for survival in this new landscape. I guess if you had people get along all of the time and find a good spot to hunker down and live well, that wouldn’t make for an interesting story. However, the opposite is also off-putting. Clementine spends most of the game being buffeted around by different groups (and reforming groups), none of which provide stability or security. She’d have been much better off just footing it into the wild by herself.

I also agree with reviewers who note that the high point of the season — the arrival and showdown at Carver’s hardware store fortress — comes way too soon, leaving the remainder of the game to meander and introduce pointless conflict after pointless conflict.

The story is doubly important here because that’s all the game has. There’s even less puzzle-solving than the already anemic Season One, so mostly it’s just prodding the screen to progress, participating in the occasional quick-time event, and making choices (dialogue and action).

Fortunately, the story did keep me interested for the most part. Carver was a strong threat and the game did well at making you loathe him completely. The return of Kenny was at first joyful and then increasingly regretful, as the man is even more unhinged than he was following the deaths of his wife and son in the previous season. There are a few great new characters here, particularly Luke and Jane, each of whom bring another slice of story into the end of the world as we knew it.

Telltale did make more of an effort to present choices that had meaningful consequences, but the story could only branch so much, and still many decisions — such as efforts to save characters — played out the same no matter what you did. The illusion versus the reality of choice is very much in effect here. If you can buy into the feeling of having agency in these games, then immersion slips over you. But if you get jolted out of it — as I was in the final episode — then it’s just another game of you vs. developer, where the developer always wins no matter how much you try to control your destiny.

I hear they’re making a third season, which I’d love to see. Hopefully Jane would be the protagonist, or a much older Clementine. So now I’ll be turning to Telltale’s Borderlands game, which I’ve heard good things about.