When a mission starts out with a cheerful, newly sentient robot finding her way in the world, moves on to missing organs, travels to a hospital full of people dying in their sleep, and then wraps up with a trip through your own subconscious, then you can only be in The Secret World.

While I’ve been playing TSW fairly regularly, I haven’t touched Tokyo at all for months and months now. The last issue was perhaps the first mission pack I purchased that I didn’t immediately devour, mostly because I was so focused on my lowbie character. That said, in two play sessions, MJ and I ripped through three of the four new main quests (mostly because they all flowed from one into another). And one was investigation, which is sort of the main course of this game for many players.

I think I’m about done with Tokyo, to be frank. Oh, it’s a fantastic location in many respects with some of the best NPCs yet in this game, and I’m glad we finally got to see Ground Zero for the Filth bomb. But it’s a big, big world, and we’ve been in Tokyo for so very long now. It’s time to move on (and perhaps leave the AEGIS system behind, yes?).

Anyway, the bulk of our playtime was spent on the mission “Wetware,” which had us going inside the Kaidan hospital to do a little Scooby Dooing. The hospital had Orochi stamped all over it, the horror and blood barely camouflaged by the high tech ‘bots and sterile walls. Actually, it wasn’t that gory until the very end, as the bulk of the mission lets the fear settle in by having you discover — via notes and charts — the fact that some sort of force has been killing people in their sleep all over the place here. The In-Between Man, they call him, and only a certain song seems to keep him at bay.

I wasn’t looking forward to checking out the morgue, no sirree, and was only slightly heartened to be doing so in the company of two other people. I did get a serious jump scare when I saw a lore object in the next room and ran in there, only to be ambushed by a cyborg waiting right behind the door. Think people next door heard me yelp.

This whole “shadowy figure who kills people in their sleep” — and tell me I’m not the only one thinking Freddy Krueger here — led to an incredibly interesting mission follow-up with Jung, the large-headed boy at the kindergarten playground. Jung used his Professor X powers to send me into my own subconcious for a bit of scouting around. Difficulty-wise, it was a really easy mission, with only one fight in the bunch. But the hook here is that you actually get to make a bunch of choices (which TSW rarely allows), and apparently some of these decisions will have an impact on the future game.

Future effect or no, I thought it was really interesting to go through a mission that had you defining who your character was and where he or she came from. What trait best defines you? Were you alone as a kid? Did you have a love or a child? My character chose bravery as a main trait (mostly because that was the first chalkboard I saw and clicked before realizing that there were others), and was alone for most all of her life. She had no parents, no friends, no love… but I did give her a kid. Don’t know why. Now I have to wonder where that kid is. Hopefully not on Solomon Island.

After so much running around and puzzle-solving, it was a relief to battle my shadow-self and get a little shotgun action in. 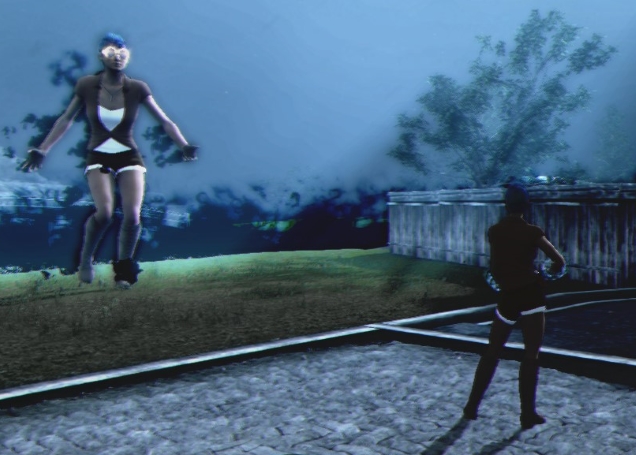 Beware kids! If you don’t eat your veggies, Mega-Syp will come get you!