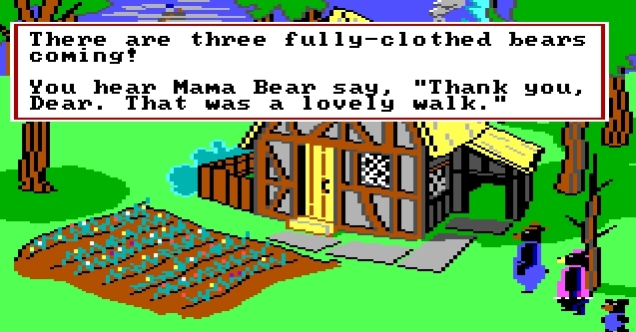 (This is part of my journey going checking out King’s Quest III. You can follow the entire series on the Retro Gaming page.)

As the King’s Quest universe is littered with copyright-free references to fairy tales, so we finally come upon the Three Bears who, as the game notes in surprise, are “fully clothed.” Also they are walking only on hinders. And talking. Unusual bear behavior, that.

One can’t help but think that if the bears went out for a walk and left their breakfast on the table, then it’s all going to get cold before too long.

So let’s talk about what’s going on here. Obviously there’s very little overarching narrative, other than exploring locations, but what’s happening is that I’m trying to frantically find various objects to mush together for magic spells — objects that the wizard will kill me if he bumps into me and I’m carrying them. 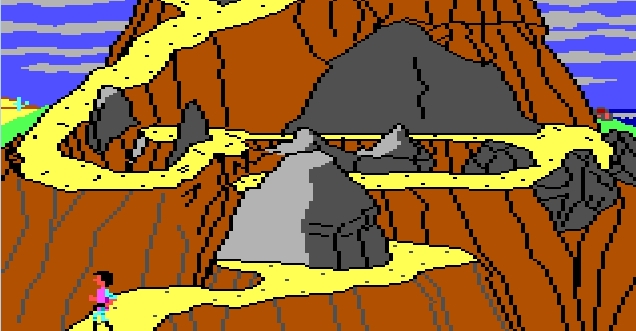 The magic map is nice, but the one thing it won’t do is teleport you back up to the house. Oh no, you have to walk up this dang path every time. And if you haven’t done a Sierra adventure game ever, then let me say that the pathing is really unfair. It’s often diagonal on the screen — but you can only walk straight up and down or sideways. It’s also obscured by various objects. And if you make one step off the path, you fall to your death.

Racing against the clock, I dash — well, plod slowly because that’s the default speed — back to the house, up the stairs, and into my bedroom. Precious seconds tick by as I type over and over and over again to hide the forbidden objects (inventory items marked by an asterisk*). Each one has to be hidden separately and it’s a massive, huge pain in the butt.

I only find out later that I could type “HIDE ALL” and that would empty my whole inventory under the bed.

Speaking of pains in the butt, man I am just not a fan of this timing system. Having to stop my exploration and wait for the clock to hit a certain minute so that I can feed the wizard when he shows up and then wait several more minutes for him to go to sleep is bogus. Oh, and there’s only so much food in the game, so if you go past two hours and can’t get out of the wizard’s thrall, then it’s game over forever. 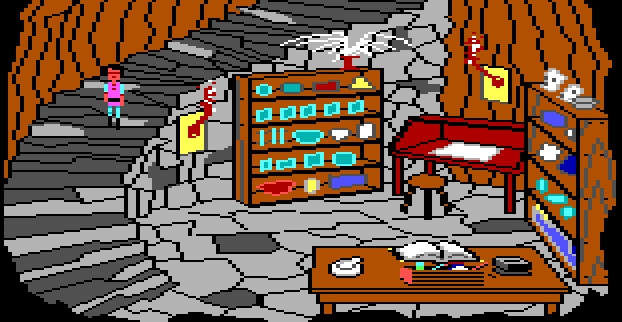 More exploration of the mansion turns up a secret cave, which is the wizard’s workshop, I guess. Very classy. I loot ALL THE THINGS.

It’s down here that you can use — but not take — the wizard’s magic book to perform all sorts of helpful spells. This sounds a lot more fun than it is, because if anything, King’s Quest III has a monopoly on “tedious instructions” and “painstaking typing.” What’s even worse is while you’re typing in all of the directions and word-perfect spells, there’s this insanely shrill song that’s playing, probably to throw you off your game.

Anyway, I whip up a magic cookie that should turn the eater into a cat. Hm. Kind of want to nibble on this myself.

Slightly amusing little easter egg behind one of the tapestries.

With poisoned porridge in hand, I… wait for 20 real-time minutes. Boy, this game sure knows how to pack in the excitement and suspense, doesn’t it?

At least my ruse works: The wizard downs the whole bowl without suspecting anything and morphs into a cat — for good, I think. A victory fanfare plays and I’ve won the game! No, wait, that’s not right; we’re only in our second session. But we have freed ourselves from the wizard AND the clock, meaning that the game should get a lot easier from here on out.