(This is part of my journey going checking out King’s Quest III. You can follow the entire series on the Retro Gaming page.)

With this newfound quest to save my royal family from certain destruction at the claws of a three-headed dragon, I’ve got to find a way to leave this realm and return to Daventry. Considering that this land is pretty dang small, that really leaves me only the option of going into the small village and seeing if I can book passage on a ship.

As an aside, I thought it was funny that when you go into the tavern, you hear a crude rendition of “What would you do with a drunken sailor?” as the only people in here are… drunken sailors.

Passage booked, I board this garish ship and start my journey home!

Of course, the second I step on board, I find out that these aren’t just sailors but (dun dun DUNNNN) pirates! And I am now a captive! At least the ship is heading toward Daventry, so I’m going in the right direction. 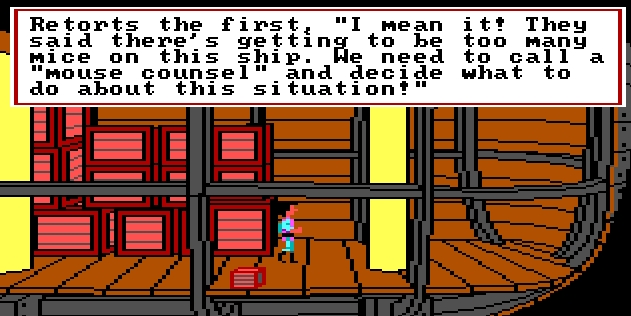 The pirates take all of my stuff — nooo! — except for wads of (seriously) enchanted dough that are in my ears that allow me to hear animals. The rats in the hold are worried about a cat on board and I wonder how much time the devs had on their hands here. They also talk about buried treasure and what happened to the last cabin boy (sharks). 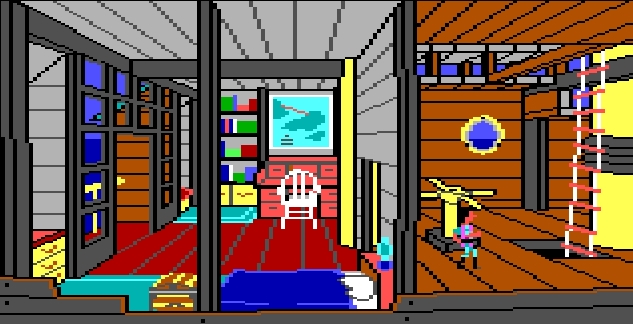 A little sneaking around and I steal all of my stuff back from the pirate captain’s chambers. Dang, that looks so cozy in there. I want to be a pirate too!

With all of my magic in hand, wouldn’t you think I’d embark on an Under Siege-style retaking of the ship? But no, it’s back to the hold with me as I wait out the real-time clock for another 20 minutes or so as the ship crosses the ocean.

This is what passed for “fun” back in the day.

When we finally — finally — get close to the shore, the pirates drop anchor and I use some sleeping powder to knock them all out. Then I slit their throats, toss them overboard, and declare myself the new pirate king.

No? Darn it, this game never lets me have any fun.

Instead I hop overboard, outswim a shark (which is playing the Jaws theme), and arrive safe and sound in Daventry. Home! At last!