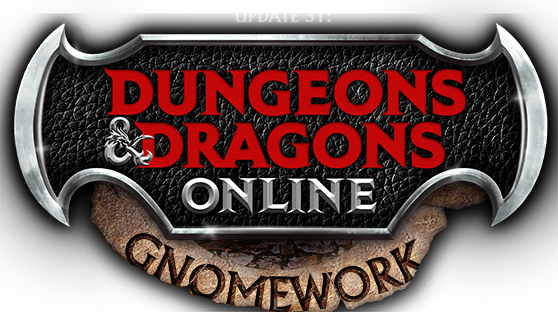 Syp is AFK on vacation this week and put out a call for substitute writers! Today’s guest post is brought to you by DDOCentral. Check out his blog for more great word-stuff!

Dungeons and Dragons Online (DDO) recently celebrated its 10th anniversary in February 2016, which is a milestone within the MMORPG gaming community. Not only is DDO one of the few MMOs to have supported its fantasy world continuously for over ten years but was also the pioneer of the hybrid free to play business model now common with PC based MMOs.

There are currently 128 free to play quests in DDO, with the three most recent f2p quests released on May 10th, 2016 as an extension of the 10th anniversary celebration. The official 10th anniversary update earlier this year introduced the Gnome and the Iconic Deep Gnome player races to DDO and the subsequent Update 31 is appropriately entitled, Gnomework.

All three of the f2p quests feature a Gnome NPC quest giver and each of the quests somehow involve one or more of the gnomish qualities of exploration, illusion mastery, and invention. ‘Good Intentions’, ‘Memoirs of an Illusory Larcener’, and ‘Search and Rescue’ are offered at both the mid-level Heroic and upper level Legendary quest difficulties. 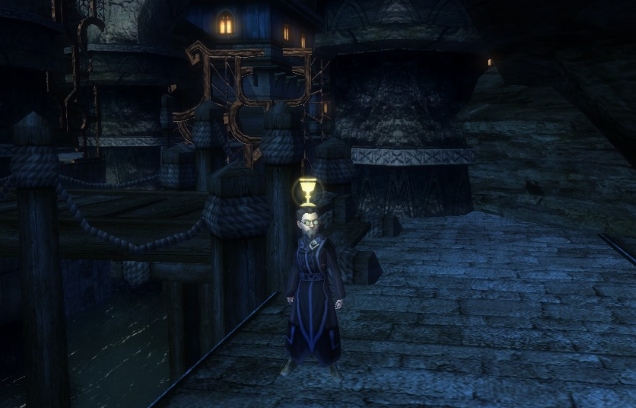 Romblemore explains to the party that he has invented an Animatic which “will change Stormreach forever!” The Animatic is intended to clean up debris from the constant
destruction caused by marauding pirates, Devil invasions, tavern brawls and the like using Animated Objects controlled via The Animatic’s force field. The bespectacled gnome wants to present his new device in the Exposition of the Arcane, so he offers to teleport the party to the showplace for his construct. 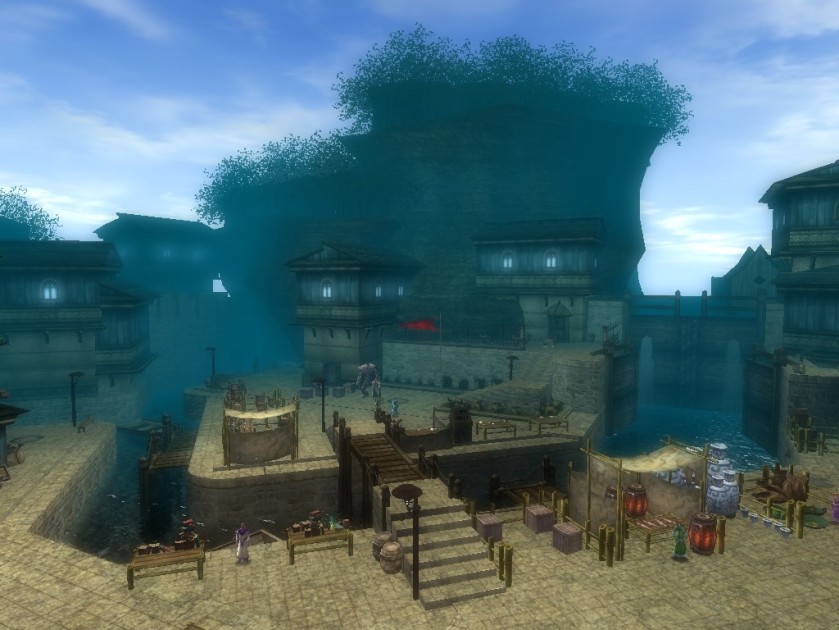 Once the party finds Romblemore among the vendor stalls, he announces the power that The Animatic possesses. The party is doubtful that this imposing looking Iron Golem will be able to bring to artificial life tools and building materials but the diminutive wizard goes forward with the demonstration anyway.

Things do not go as planned and nearby animated crates selected for the exhibition begin to attack everyone in sight. Romblemore then reveals that The Animatic was built out of a refurbished House Deneith war golem – “Some of its old hostile commands must still be operational!”

As the malfunctioning war golem continues to go berserk and animate yet more crates, Romblemore says that he could make a wand to deactivate The Animatic but that he lacks
the proper ingredients. The gnome wizard needs a Beholder Eye, some Pixie Dust, and finally a Unicorn Horn for the wand itself and explains where these items might be found
in the District.

The Saltire District consists of indoor shops along shallow canals, taverns, sewer tunnels, courtyards, and stone manors, which are now filled with hostile objects animated by the rogue golem’s energy field. Romblemore will attempt to slow down The Animatic while the adventurers search for the enchanted components scattered over the quest map.

The revised Saltire District is expansive with a number of twists and turns through the indoor areas and among its rooftops. DDO is now of the age where it has its own in
jokes and two of the three ingredients are held by noted Harbor area NPCs: Goldscuttle the Kobold, who accepts prayer bead Collectibles for Augments outside this quest, and Durk the Deranged, the bestower of several quests in the Harbor, the Marketplace, and The Twelve. 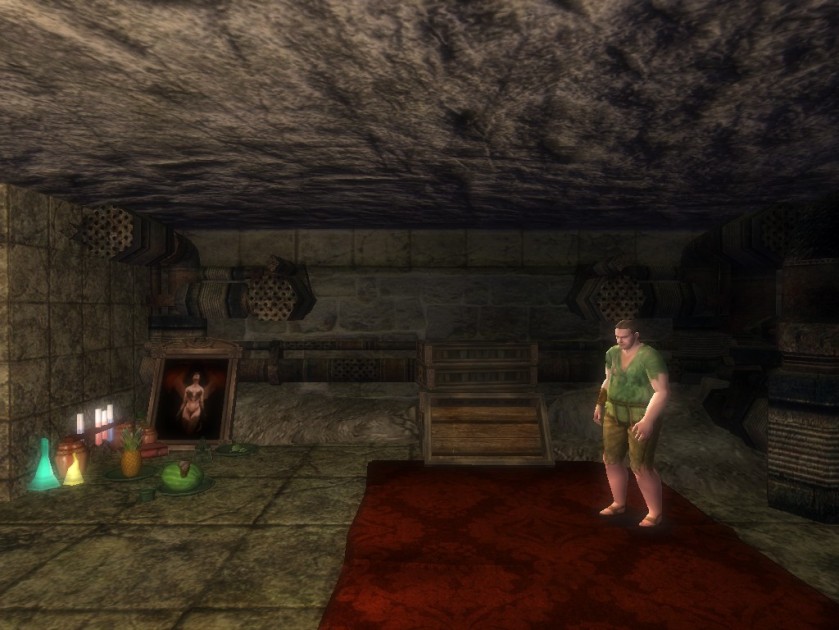 Most of the mobs in Good Intentions are animated furniture, training dummies, implements, weapons, more crates, and even fruit that will attack characters who are not in stealth mode or who are not using an invisibility buff. The time to complete the quest can be shortened considerably by avoiding these mobs altogether and heading directly to the three ingredients once their locations are known. 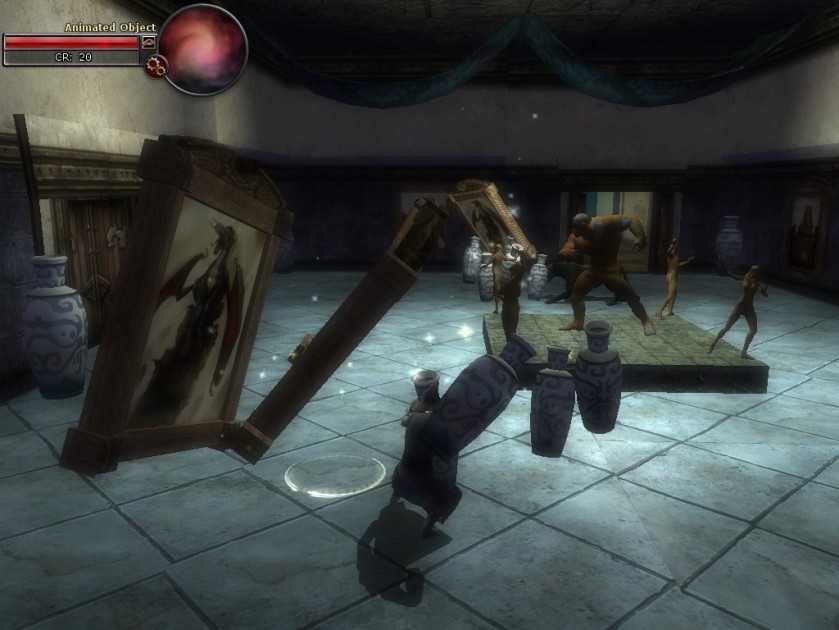 There are also random elements to Good Intentions – an optional which spawns two of five possible named monsters of immense strength, including the new as of the Gnomework update Umber Hulk and another which places local madman Durk’s pet squirrel, Nibbles, in varying parts of the quest map.

When the three pieces of the inchoate deactivation wand have been recovered, the party returns to Orben Romblemore and The Animatic. Orben assembles the magic wand and then lowers his containment bubble to shut The Animatic down permanently but the wand fizzles out as soon as the golem is freed. 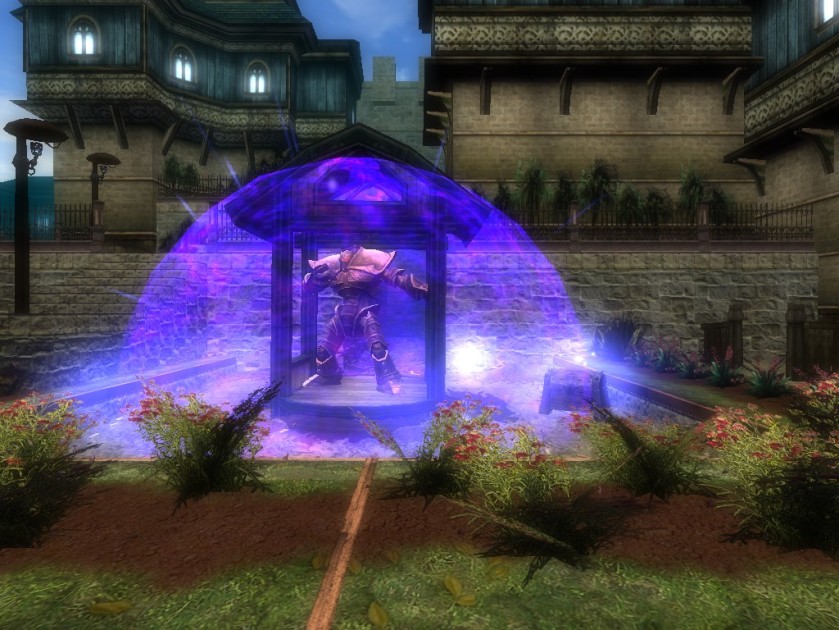 The boss fight with The Animatic, now fortified inside a floating gazebo, will complete the quest after the machine’s defeat.