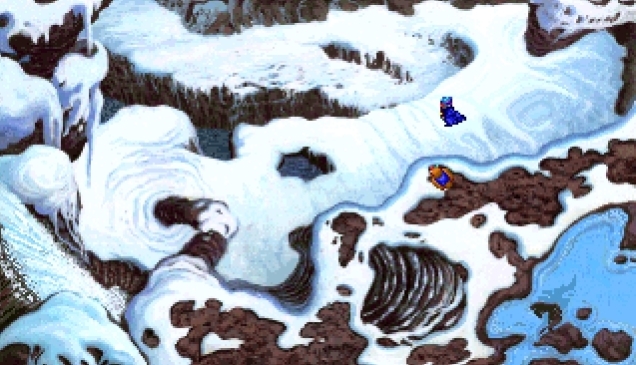 (This is part of my journey going checking out King’s Quest V. You can follow the entire series on the Retro Gaming page.)

With freedom attained from the Snow Queen, Graham and doltish sidekick owl Cedric proceed down the mountain pass. Got to say, I really like the overhead perspective on this screen. Shows artistic talent at work.

Graham’s freedom doesn’t last long, however: A giant roc sweeps him up and carries him to its nest to be food for the twins hatching out of a single egg (uh… can birds do that?). Fortunately, a helpful eagle comes by and carries Graham off to safety, making me wonder why my loser owl couldn’t do the same. Cedric, when I get my kingdom back, you’re going into the national zoo.

Following that, Cedric finds a boat and heads out to sea. It’s at this point that I’m starting to think that he doesn’t have an actual plan or map to find Mordack. He’s just trusting that by aimlessly wandering the world, he’ll somehow stumble onto the bad guy and save the day. Probably will work, too, since game designers are lazy and don’t create an extra 1,800 screens to simulate a full game world. 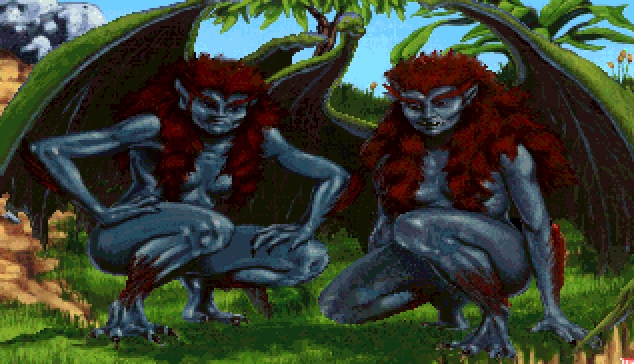 And if you haven’t caught on to a running theme here, Graham gets captured. Again. This time by fairly naked blue harpies. Dang, Sierra, did Al Lowe come into the office this particular day?

Oh, and how do you defeat the harpies? With a harp.

I am not joking.

Haha, Cedric got seriously injured by the harpies. Graham takes a minute to gloat and perhaps get a secretive kick or two in. The narrator tells me that Cedric is moaning in pain, and I am seriously tempted to just walk on by and leave him for good. Probably will fail the game, but wouldn’t it be worth it? It totally would.

Following this is an interlude with a hard-of-hearing hermit (who never gives Graham his name). The hermit heals Cedric (nooo) and calls on a mermaid to help lead Graham to Mordack’s island. Guess that was the plan all along? Hope crashing your ship on the island’s shore was also part of the plan, because that totally happened.