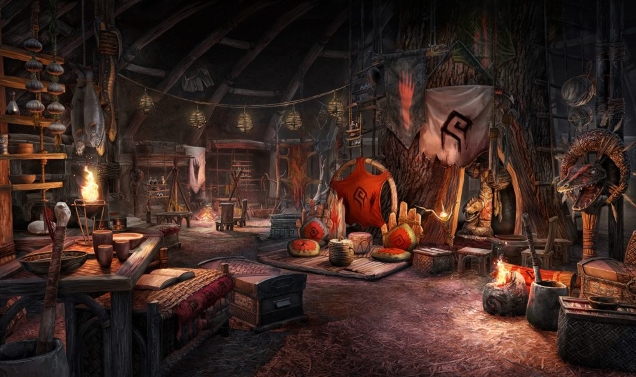 Yesterday we got a huge amount of insight into Elder Scrolls Online’s upcoming 2017 player housing system — homesteads — and I have to say that this news definitely tips me over the edge into wanting to play the game. It looks kind of terrific, with multiple house styles (and yards), freeform placement, and interactive stations. In my eyes, it was the final big piece that the game needed to be fully fleshed-out… maybe not done, but an MMO proper.

Housing isn’t a fancy extra that some of the more extravagant MMOs can afford; it should be absolutely mandatory to any serious online game that wants to maintain and grow a community. Over the years I’ve migrated from the position of “oh housing is nice if it’s there” to “why is it NOT in this game? That’s a travesty!” I’m genuinely nonplussed that popular games like World of Warcraft and Guild Wars 2 (not to mention more niche titles like The Secret World) lack true personal housing system. Each of those three have tried some weird offshoot of housing but have yet to offer true player housing as we see in RIFT, WildStar, and EverQuest 2.

Why do I feel so strongly about housing? It it just my fanboy preferences reaching hyperbolic limits or is there some objective reasons behind my demand for its inclusion everywhere? I won’t deny my emotions, but I have to say that feelings aside, there’s a world of difference between an MMO that contains housing and one without.

An MMO with housing tells you, the player, that you have a place here. That you are welcome, that this game is “your house” in which to make yourself comfortable. It gives players ownership and agency, a place to express personal creativity and to mold the game around them instead of only vice-versa. An MMO with housing encourages more socialization and roleplaying, activities all outside of the constant murder-spree that we seem to otherwise engage in. Housing transforms our characters from nomads without strong roots into citizens with a home base.

For a studio, housing is free publicity for the game. Players LOVE to show off their houses — on forums, on YouTube, in blogs — and each mention of that is an invitation to come play your game. It’s player-created content in your game that can, with some thought, be promoted and utilized to expose your whole community to a changing and diverse world.

Housing is a bridge between players and developers, both of whom become co-creators and teammates. Players aren’t just consuming what developers make, but creating something to share back in return. It fosters goodwill and excitement between the sides and makes communication something other than players complaining about the most recent patch.

It it hard to add such systems? I have no doubt. I also would fully believe that there’s a chunk of the playerbase of any game that wouldn’t care about housing at all — but that’s true of most systems.  But it is worth it. So, so worth it. In a time when hundreds and hundreds of MMORPGs are running, when players have the financial freedom to play any they like, a game with a housing system has a great long-term advantage over one that doesn’t. It’s an investment in your community, in your future, and it elevates an MMO from being merely a game to virtual world status.

11 thoughts on “Why player housing should be mandatory, not optional, for MMORPGs”