(Join Syp as he attempts to document a complete playthrough of The Secret World from start to finish. What will The Secret Adventures discover next? Find out in this exciting installment! WARNING: Spoilers and stories ahead!)

I’m going to take a brief detour in my adventures through Transylvania to take advantage of TSW’s single Christmas mission (there are Christmas events, of course, but this series is focused on the missions), the Christmas Conspiracy.

I receive a text message inviting me to a performance of The Magic Flute at the Albion Theatre in London. I ain’t going to dress up for it, but I will wear this new mistletoe circlet and see if anyone wants to dare for a kiss. At the theater, one of the main actors calls me and says that his Council of Venice sister sent him something and that he was to contact me about it. This is as much conversation as we are to have, for almost immediately at the start of the performance, the purple Nazis come in and shoot up the place.

Even though it’s my second time through this, this cutscene is still pretty shocking. It does nothing to endear me to the Phoenecians, which continually strike me as a bloodthirsty organization playing catch-up and not holding any reservations against murder and massacre.

After putting a stop to the assault (although far too late for the actors and audience, alas), I dig around backstage and find some information about what’s going on.

Apparently — and this is the Cliff Notes version — all of this concerns the remainders of jolly Saint Nicholas, whose body and leftover juices are supposedly miraculous and all that. I don’t know why past people had such a fascination for keeping body parts and fluids of saints around, but it was gross. A sticker collection would’ve been better and probably just as useful.

So Santa here had his body split in two, and one half has been stolen away. There’s also a conspiracy with this particular play, as Mozart wrote it as some sort of code to accessing the catacombs where part of the body was kept by the Masons. And then Mozart was quickly killed in rather suspicious circumstances. Past people were just weird as all get out.

Interesting fact: One of the books I found in the Council of Venice library (which is, again, just a horrible place to hold a library of physical books mere inches away from water that’s dripping and pooling) talks about Lilith and Samael, even suggesting that she might be behind Mozart’s death. 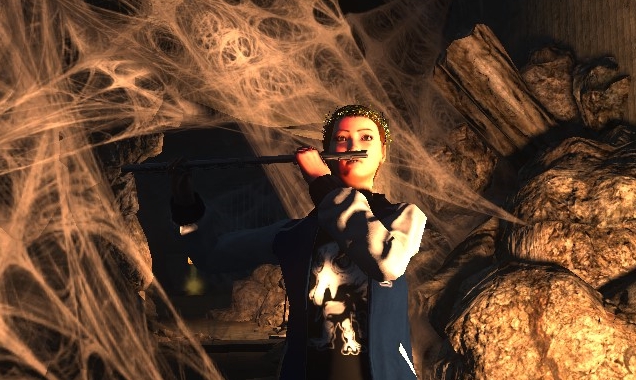 Then I get to the meat of this mission, which is the trip through the Masonic catacombs. It’s best described as a “music dungeon,” as you use a magic flute to perform simple songs that have various effects — opening doors, moving statues, calling fire, calling water, and so on. The trick is to pay attention to the tunes you encounter and figure out how to use them in various situations. Also, sometimes you must reverse the tune to get the reverse effect.

It’s not that hard once you get into it, and there needs to be very little research outside of the game itself to finish it up.

The catacombs aren’t particularly scary, although the large statues that slide along can be a little unnerving. Especially if you’ve watched Doctor Who recently. But no, they don’t come to life, and even the few times that you “die,” you’re just sent back a little ways and told to try again.

At the end of the catacombs are another heapload of Phoenecians, including big baddy Lydia. I’m kind of annoyed that I go through all of the work to solve the puzzles and these purple jerks just blow a hole in from the sewers and get here that way. I deserve a raise.

Lydia’s thing is being bothersome to fight while taunting you and leaving riiiiight before you can kill her. Which she does. That’s OK, since I am able to recover the jar of Santa Juice.

In a touching little epilogue, Saint Nick arrives in ghost form, kneels down over the slain Council woman who started this whole mission, and the two of them disappear in a bright flash of light. She’s at the North Pole now, Timmy. That’s where all murder victims go on December 25th, don’t you know?

One thought on “The Secret World: Christmas conspiracies”