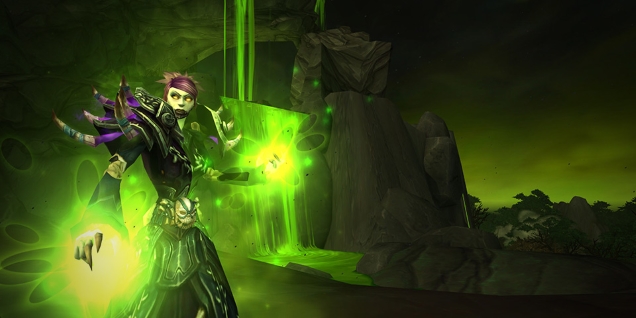 It’s been a good long while since I played a Warlock in WoW with any regularity. Even in Draenor, where I had the splendid Terrorguard, my ‘lock was still number three behind the Death Knight and the Hunter. But now that my DK is in maintenance mode until 7.2 and I’ve lost all interest in my Hunter, it’s the Warlock’s time to shine.

As I’ve been taking her through the leveling areas, I’ve been compiling a list of things I’m starting to appreciate (or re-appreciate) about my Affliction lock:

1. Speed boost on demand: While my DK and Hunter both have an every-so-often speed boost, Burning Rush is always available to use on my Warlock to get around inside and out for as long as I want it (with no cooldown!). It’s a massive boon in places that I can’t mount, and when I have the huge regeneration going from eating a hearty bowl of fighter chow, I keep regaining any lost health from the skill.

2. DoT central: Apart from the pets, being able to throw down a host of instant-cast damage-over-time spells on enemies was always my favorite thing about this class. It’s so immensely satisfying to see an enemy flail about in vain, knowing that it’s going to give up the ghost in just a few more seconds.

3. Impossible to kill: I forgot how hearty Warlocks are, especially as a cloth-wearing class. Even when I’m not using a tank pet, I don’t have to worry too much, because I’ve got a high health pool, healthstones on demand, and even a soul stone as death insurance. So far I might have died two or three times total in Legion, and that’s mostly been from overpulling due to a sense of invincibility.

4. Fel-doggy: Yes, I miss my Felguard, my two-in-one tank and DPS machine. But it’s a good trade-off to go to Affliction, and it’s made me appreciate my demon doggy a lot more. It does decent damage, especially against DoTted targets, and I like how I can keep switching targets to DoT up while the doggy continues to chomp away at the first guy. It’s a good battle companion to have.

5. Bonus pets: I love how I have two more limited-time summons available. I use my grimoire of service to pull out a voidwalker every 90 seconds (for 25 seconds) when I want an instant tank or just a smidge of bonus DPS, and there’s the doomguard every 3 minutes for a nice burst of ranged damage. Three pets out at once, and I’m not feeling the loss from demonology much any longer.

6. Relaxed range: As much fun as the Death Knight is, I still have to close into melee range to realize my full DPS potential. With the ‘lock, I’m rediscovering how relaxing it can be to just attack stuff from range, especially in dungeon runs. As an added bonus, the range for my spells is absolutely huge — I’m always surprised how far away I can attack things now.

7. Special snowflake status: From observing and taking a peek at some class census charts, it appears that Warlocks are still (as they’ve usually been) among the lesser-played classes in the game. And while it might be silly to feel this way, I love connecting with a great class that isn’t overpopulated. Being set apart from most of the crowd is kind of cool.

8. Pet options: While I mostly run my doggy for a bulk of my adventures due to the designed synergy with Affliction, it’s nice to have the option of the other three pets if I need a tank, ranged DPS, or a melee charmer. Plus, there’s the infernal summons, which can be an AoE spot tank if needed.

9. Gnome sweet Gnome: For some reason, Gnomes and Warlocks have always gone together so well for me. Maybe it’s the overall package that looks small and odd and unthreatening… until it burns you from the inside-out while a demon chomps on your skull.

10. It feels subversive: Taking on the Legion, I’m in my element. I’m not only fighting fire with fire by throwing demons back at these guys, but I’ve got skills to handle demons better than anyone else. If I’m bored, I head off to a demon area and enslave myself a new pet for a while. Your adorable bear has nothing on my towering hell nightmare.

3 thoughts on “10 things that rock about my WoW Warlock”